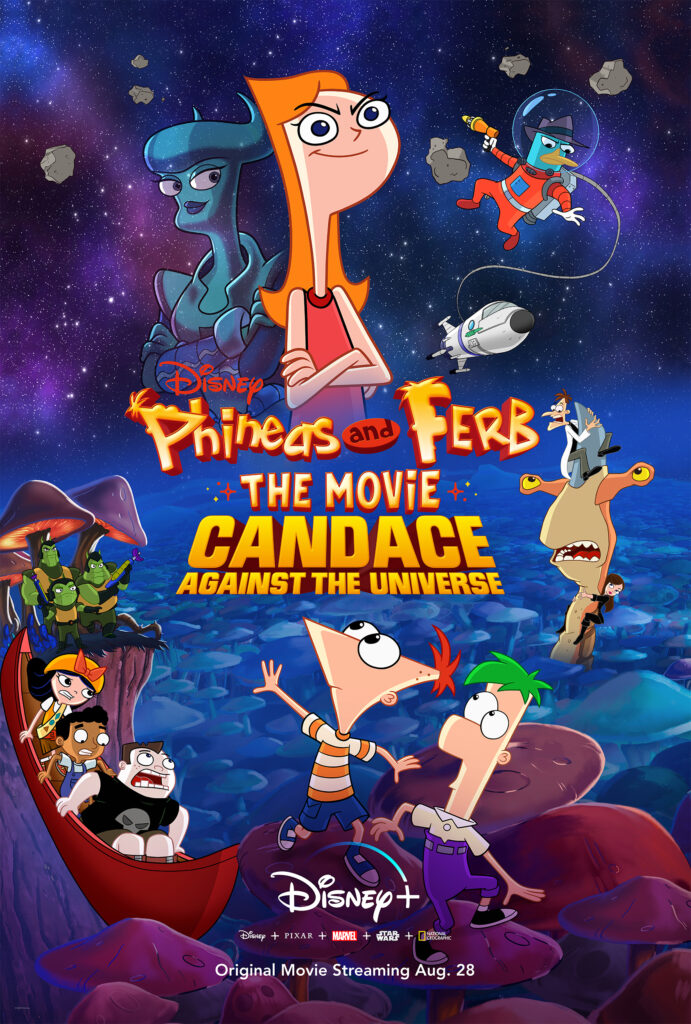 BURBANK, Calif. (July 2, 2020) — The out-of-this-world animated movie “Phineas and Ferb The Movie: Candace Against the Universe,” from Disney Television Animation, will premiere exclusively on Disney+ Friday, August 28. The soundtrack, from Walt Disney Records, will be available the same day.

Executive-produced by the creators/executive producers of the Emmy Award-winning “Phineas and Ferb” series, Dan Povenmire and Jeff “Swampy” Marsh, “Phineas and Ferb The Movie: Candace Against the Universe” is an adventure story that tracks stepbrothers Phineas and Ferb as they set out across the galaxy to rescue their older sister Candace, who after being abducted by aliens, finds utopia in a far-off planet, free of pesky little brothers.

All four seasons of the original animated series “Phineas and Ferb,” along with the Disney Channel Original Movie “Phineas and Ferb the Movie: Across the 2nd Dimension,” are also available to stream on Disney+. Beginning Tuesday, August 25, all episodes will be presented on Disney XD leading up to the movie’s premiere.

In addition to the soundtrack for the new movie, brand extensions for the movie will include cross-category product available at Hot Topic, BoxLunch and Amazon this August.

Disney+ is the dedicated streaming home for movies and shows from Disney, Pixar, Marvel, Star Wars, National Geographic, and more. As part of Disney’s Direct-to-Consumer and International (DTCI) segment, Disney+ is available on most internet-connected devices and offers commercial-free programming with a variety of original feature-length films, documentaries, live-action and animated series, and short-form content. Alongside unprecedented access to Disney’s incredible library of film and television entertainment, the service is also the exclusive streaming home for the latest releases from The Walt Disney Studios. Disney+ is available as part of a bundle offer that gives subscribers access to Disney+, Hulu (ad-supported), and ESPN+. Visit DisneyPlus.com to subscribe and/or learn more about the service.