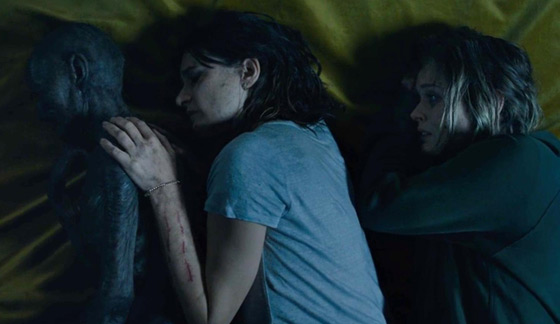 Every once and awhile, I still encounter someone who tells me that the horror genre is trash; that it’s nothing but blood, guts and boobs. It doesn’t take me long to rattle off a list of contemporary horrors that don’t fit that mold, and generally scare, thrill and linger in the psyche of viewers. “Get Out” is always an easy one to point to, as well as “It Follows,” “The Mist,” and others. In the current age of quarantine, I can now point to a streaming option that’ll push any viewer to the edge of their seat and leave them petrified through the end credits.

“Relic” opens on Kay (Mortimer) and Sam (Heathcote), the daughter and granddaughter of Edna (Nevin), visiting Edna’s house which sits by itself in dense, foreboding woods. The reason for their trip is that they’ve been told Edna has gone missing. The only thing that greets the mother/daughter duo upon their arrival is strange creaks and groans made by the house, as well as several mysterious notes that range from innocuous (“turn the light off”) to insidious (“DON’T FOLLOW IT”). Just as the authorities are called and a search for Edna begins, she reappears unannounced in the house one morning, making tea, acting as if nothing happened, despite the soles of her feet being covered in dark grime.

“Relic” relies on shadows, haunting imagery, and our general fear of the dark and unknown to keep us off kilter from the get-go. But it’s as the movie progresses, that “Relic” finds other scare tactics within the realm of mental health. The dive into realistic fears is combined with other tricks and treats from the horror genre grab bag. It’s a film that manages to earn some of its cheaper jump scares as opposed to throwing them in randomly mad libs-style like most mainstream horror films or any subpar Blumhouse production.

“Relic” takes it’s time, moving at a creepy pace, slowly sinking its claws in your mind. The directorial debut for Natlie Erika James is nothing short of impressive. The film moves with such confidence, that you suspect a veteran filmmaker is behind the lens. Having only written and directed a handful of shorts in the past, James also reveals the kind of equal parts terrifying and heartbreaking craftsmanship that Stephen King and Rod Sterling spent decades perfecting. James joins others, like Jennifer Kent (“The Babadook”) and Emma Tammi (“The Wind”), when finding the unsettling middle ground between cerebral horror and spook house tropes.

The film’s atmosphere grips you immediately, letting you know upfront that not everything is as it seems and that something is horribly wrong with Edna. Nearly every viewer will recognize that Edna is suffering from a mental illness at her ripe age, most likely dementia.  But just like “Hereditary” a few years ago, the supernatural and family history can collide in frightening ways. The movie effortlessly keeps us on pins and needles, even when we think we’ve figured it all out. There’s this nauseating foreshadowing that we can’t shake as “Relic” reaches its climax. Even when the true horror reveals itself, we’re left with a pit in our stomach because we know what will happen next, even as the film ends.