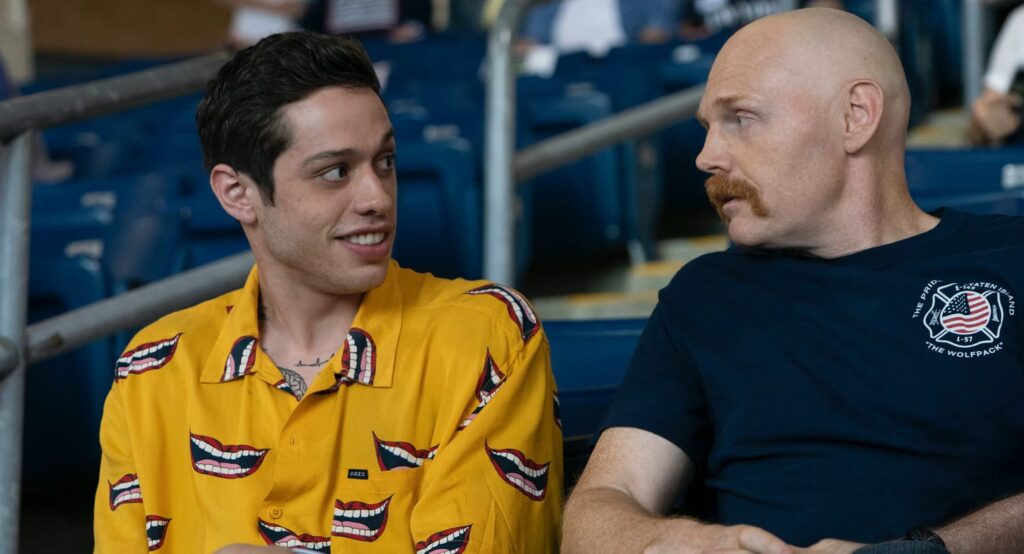 Scott Carlin (Davidson) sits on the couch with some friends, enjoying their company.  One of them notices a tattoo on Scott’s arm and asks him the significance.  His attitude seems to change as he informs the questioner that the ink commemorates the day his father died.  Upset that she made have upset Scott, she begins to apologize, to which Scott and the others burst into laughter as if it’s no big deal.  “Knock, knock,” one of them says.  “Who’s there,” Scott queries.  “Not your dad!”

A dark comedy featuring an unexpectedly powerful performance from Pete Davidson, “The King of Staten Island” takes a look at a young man who is still struggling to understand the eternal question, “why?”  Based in part on Davidson’s own family experience – his father bravely died while attempting to rescue people inside the Marriott World Trade Center Hotel on September 11, 2001 – the film, which Davidson also co-wrote with director Apatow and Dave Sirus, is an often funny, sometimes tragic look at a life forever changed in a single tragic moment.

Scott, age 24, still lives at home with his mother, Margie (an excellent Tomei) and pretty much spends his days hanging out with his friends, smoking weed and trying to get a job as a tattoo artist.  Scott’s own body is covered in tats, some professional and others not-so professional.  Things change when, while partying with his friends in the woods a young boy wanders by.  He’s encouraged to join the group and even agrees for Scott to give him a tattoo.  Of course, as soon as the needle touches his skin he jumps up and runs away.  Soon the young man and his father are on Scott’s doorstep.  Dad is not angry.  Marcie tries to intervene but the man continues yelling.  When he asks to speak to Scott’s father he is informed that he is dead and this softens the man a bit.  When he returns later to apologize he asks Marcie out.  After 17 years Marcie has begun to live for herself again.  Scott is unhappy with the situation and even more so when he learns that Marcie’s new friend is a fireman.

As I noted earlier, “The King of Staten Island” rests squarely on the narrow shoulders of Pete Davidson.  I’ve found him funny on “Saturday Night Live” – though I can’t help but cringe when he tells 9/11 jokes – and expected him to be funny here.  But it’s the emotional journey Davidson takes that impresses.  Scott has a lot of pent up feelings – as I’m sure Davidson does – and when they are released the feeling is both terrifying and a relief.  Tomei, who appears to be aging in reverse like Benjamin Button, is also well cast here.  And I want to mention a great supporting turn by Steve Buscemi who plays a wizened fireman.  Buscemi was a New York City fireman before becoming an actor and, after 9/11, returned to his old firehouse to assist in searching the rubble at Ground Zero.