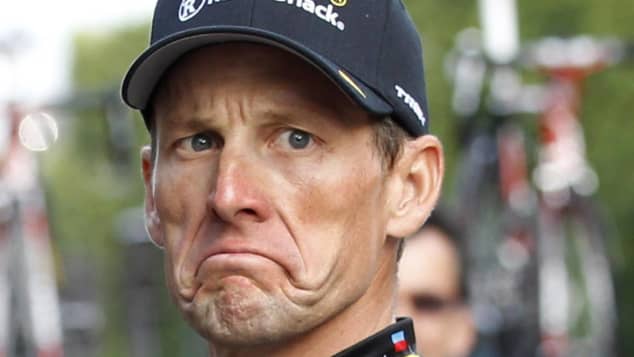 In 2008 I was driving through downtown Kansas City when I was amazed at the sight of a seven-story banner of Lance Armstrong hanging from the building where my wife worked.  I called her and asked about it and she informed me that her company – an investment management firm – had partnered with Armstrong to promote his LIVESTRONG investments.  Hearing this, I asked her “and what happens when it finally comes out that he was a cheater?”  “Hopefully that isn’t true,” she replied.

LANCE, the latest episode in ESPN’s brilliant “30 for 30” documentary series, is a two part look at the rise and the fall of one of the most celebrated athletes in American history.  Episode one begins with Armstrong telling director Marina Zenovich how he knows there are many people that, upon seeing him, just want to scream out “F**k you, Lance,” but seldom do.  He also recounts how, once when a group heading into a restaurant did just that, he called the restaurant, informed the manager that he would pay for their dinner and asked the manager to inform the party that “Lance loves you.”  Unfortunately, Lance also loves himself.

We are introduced to the young man that would go on to “win” seven consecutive Tour de France bicycle races, the most prestigious race in the world.  He played several sports as a kid but didn’t excel in any of them.  He tried swimming and developed a passion.  Entering triathlons introduced him to competitive cycling, which is where he found his calling.  Then, his life was dealt a blow when he was diagnosed with testicular cancer.  Beating major odds, Armstrong not only survived his ordeal but returned to competitive cycling.  He also returned to a dark secret he had been hiding – taking performance enhancing doses of such banned (in competitive sports) substances as EPO and Andrial.  He admits this rather non-chalantly, falling back often on the old “everyone else was doing it” excuse.

However, in Episode two, which airs this Sunday night on ESPN (and will be available afterwards on ESPN+) the true Armstrong comes through.  Like many athletes, Armstrong was set on winning at any cost, allegedly going so far as to inform the anti-doping agency that a rival cyclist was juicing.  Like many people in denial, Armstrong was like a pit bull in his defense of his reputation.  Whether using his cancer as a sympathy ploy or slandering his accusers (while testifying in an inquiry he calls one woman who filed a deposition alleging his cheating a whore) or using his status and power to destroy other riders, he comes off as a man who still feels that he’s done nothing wrong.

Part two also looks at Armstrong’s effect on those close to him.  His son, who played college football, is asked if he would ever use performance drugs.  His reply – that he only wants to succeed through his own hard work – is heartfelt and honest.  That’s what all athletes want to do.  Asked if he still considers himself relevant, Armstrong declares, “I AM relevant.”  He also refers to former U.S. Postal Service team mate Floyd Landis – who was the rider that finally outed Armstrong’s doping – as a “piece of s**t.”  Other team members relate that Lance was fine with them as long as they kept his secret but, at the slightest hint of disloyalty they were gone.

On the positive side, the film also takes a look at the magnificent work that the Lance Armstrong Foundation and LIVESTRONG have done in support of cancer patients everywhere.  Thanks to Armstrong’s popularity hundreds of millions of dollars have been raised for these organizations (I’ll admit that I bought a LIVESTRONG bracelet when they came out).  And this achievement allows Armstrong to ask if the ends justify the means.  Would this money have been raised if not for him?

In the end, you come away with a man who still doesn’t accept responsibility for anything (except his divorce).  He also laments the hardship he endured having to date such celebrities as Cheryl Crow and Kate Hudson.  Wahh!

I’m not sure if I’ll ever run into Lance Armstrong on the street so let me just say here, for the record, “Hey Lance – F**k you!”