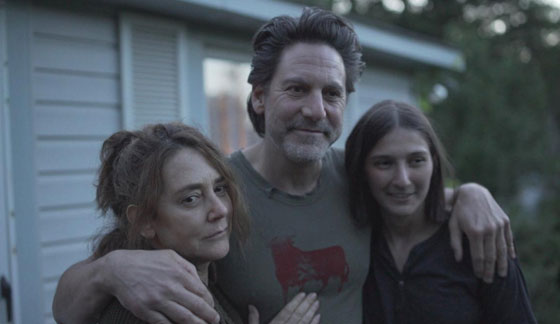 Behind the stillness of a home in the rural Catskills is a wealth of roiling emotion beautifully realized in writer-director Hilary Brougher’s South Mountain. The feature, which debuts on DVD and VOD today stars Talia Balsam who gives an achingly vulnerable central performance.

On a summer evening, Lila (Balsam) is having a cookout with her family and friends as she preps for her daughters to leave her with an empty nest. And if there’s a subtle tension between Lila and her husband, Edgar (Scott Cohen), well that may be because Edgar is sneaking off within this very household to video call a mistress actively giving birth to his child under the guise of a “work call.” Yikes.

What’s remarkable about Brougher’s film is the situation has all the potential to wade into overwrought melodrama but it never does. Instead, Balsam plays Lila with a fragility that occasionally tips over into flashes of rage but remains thoroughly grounded. Cohen too, whose philandering intro really gives him an uphill battle with the viewers, manages to wrangle sympathy as Edgar in the sensitivity he brings to the more fraught scenes with Balsam. Their dynamic of him knowing it is over versus her not quite ready to let go is compelling.

The lovely performances are all given solid support from Brougher’s production and sound design which really evoke both the encroaching summer and Lila’s isolation. The lush greenery and rustic house are their own character which composer Herdis Stefansdottir subtly accents with a sparse musical score that knows when to take a backseat to the chorus of birds, insects and rumbling clouds. Ultimately, Brougher’s film achieves a beautiful balance between the permanence of Lila’s place in the mountain and the ever shifting circumstances of her life and most intimate relationships.