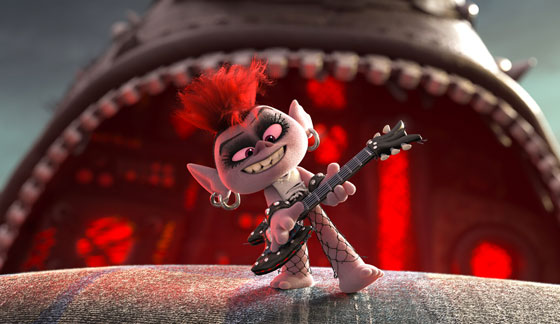 The situation in the world today has kept some studios from releasing anything “major” this past month but this week Universal is giving us the new animated film “Trolls World Tour.”  And, while you aren’t going to be able to see it in a theatre any time soon, it’s a brightly colored musical spectacular that I heartily recommend.

In the Techno Kingdom the DJ is spinning some fresh beats – like my “kids” lingo? – When his set is interrupted by the arrival of an ominous ship.  Descending from the gangplank is the tough looking Queen Barb (Rachael Bloom) wielding an impressive guitar.  She plays a few chords of hard rock, captivating those in attendance then demands their String!

Meet Poppy (Kendrick) and Branch (Timberlake).  They are best friends and live in a kingdom where Poppy is the queen.  A kingdom of smiles and laughter and, most of all, music.  Pop music to be specific.  A messenger bat arrives with a note from Queen Barb, demanding Queen Poppy give up their String. Confused Poppy turns to her father who explains that there are more Troll kingdoms in the world. Originally it was one kingdom filled with all kinds of music but in fighting caused the lyre that held the stings to break, and each group took a string with them:  Pop, Rock, Classical, Country, Techno and Funk. Poppy’s dad stresses that different Trolls should be shunned but Poppy believes in inclusion and sets of to meet with Barb. She will soon learn that differences do matter.

If you’re a fan of music in general you will really enjoy this film. Fun renditions of classic songs from all genre’s fill the soundtrack, accompanied by the bright colors and sharp animation you’d expect from Dreamworks.  The script is cleverly written, giving props to such sub-genre as Smooth Jazz and Hip-Hop while slyly playing on the assumed stereotypes of that music and their fans.  The vocal performances are fine across the board with work from such performers as George Clinton, Kelly Clarkson and Mary J. Blige keeping the music going.  Special shout out to Ozzie Osborne who plays Barb’s hard to understand father, King Thrash.

If you like this movie Personalized By Kate sells rock, pop  and other music gifts. “Trolls World Tour” is available on several streaming services, including Amazon and iTunes.