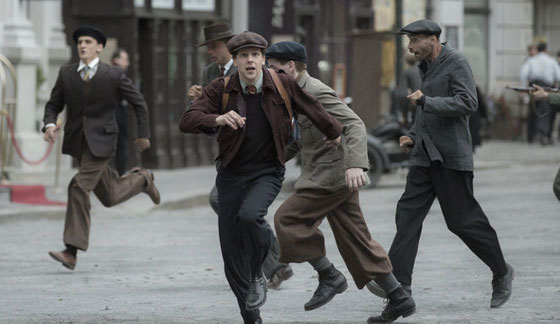 The name Marcel Marceau (1923-2007) is synonymous with mime artistry as he was the godfather of the silent artform. While his name conjures white face paint and silent, comedic stagecraft influenced by Charlie Chaplin, there was a tremendous heroism behind the façade that had started to dim with time. However, the new war drama, “Resistance” seeks to remind us of the incredible actions Marceau undertook as a member of the French Resistance against Nazi occupation.

An attempt to create a tone for “Resistance” is set during its opening scene, which takes place on the infamous night of November 9, 1938 in Munich, Nazi Germany. Known ever since as Kristallnacht, or the Night of Broken Glass, German Jews were targeted by Nazi paramilitary forces throughout the country. Thousands of businesses and hundreds of synagogues were destroyed while thousands of Jewish men were arrested. Writer/director Jonathan Jakubowicz (“Hands of Stone”) gives us a harrowing depiction of this horrific event through the eyes of a young girl who watches helplessly as her parents are murdered in the street during the assault. It’s a powerful sequence meant to grab our attention, but that momentum is quickly dissipated.

We are suddenly transported to 1945 in Nuremberg, Germany where Gen. George S. Patton (Ed Harris) addresses troops under his command at a former Nazi rallying point. Harris does not capture the emotional spirit of Patton as he stoically tells his men about a resistance fighter who made their sacrifice worth it. It is then that we are whiplashed back to Strasbourg, France shortly after Kristallnacht. Marcel (Jesse Eisenberg), whose real last name was Mangel, is a self-absorbed, wannabe thespian whose disapproving Jewish father would rather see him become a butcher.

Marcel’s life is forever changed when he is brought in by his cousin, Georges Loinger (Géza Röhrig, “The Chaperone”) to entertain over 100 German Jewish children, who were left orphaned after Kristallnacht, when they are brought over to France. Marcel becomes emboldened to join the French Resistance and finds an inner strength in the process as he and his fellow resistance members try to save Jewish children by crossing the Alps into neutral Switzerland.

Eisenberg is at his best when he is portraying Marcel doing mime, particularly when it is in front of American troops. Even so, his overall performance fails to get us too deeply invested on an emotional level with his real-life character. This is representative of the entire film as it does not leave a lasting impression as say other titles like “Schindler’s List,” “The Pianist,” or “Son of Saul.” For lack of a better word, “Resistance” is generic. There are moments of darkness and terror, punctuated by scenes involving Gestapo officer Klaus Barbie (Matthias Schweighöfer, “100 Things”) who is a little overplayed.

Despite its subpar quality, “Resistance” is still an important film to be watched as it sheds light again on a true hero plus, it reminds us all again that we should never forget what happened to the Holocaust’s six million Jewish victims.