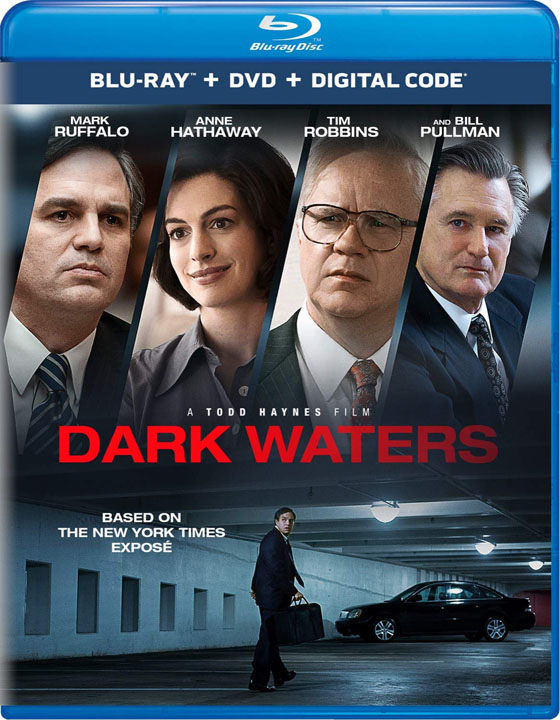 1975. A group of youngsters out on a Saturday night. They take their trucks and their beer to the local swimming hole and jump in. A pretty standard night for the teenagers in West Virginia (or anywhere else for that matter). They are surprised when they are rousted out of the water by strange men with hoses in boats.

1998. After being informed he is moving up in the law firm he works for, Attorney Rob Billot (Ruffalo) is informed that he has a visitor. The man, a farmer named Wilbur Tennant (Bill Camp) has come to ask for help regarding the horrific deaths of cows on his farm. At first Rob hesitates to speak with Wilbur but, when he learns that the man is friends with his grandmother in West Virginia, he agrees to listen. What he hears -and later witnesses – will change his life forever.

At first I thought this film would play out as a male-led version of “Erin Brockovich.” I was wrong. While I enjoyed that Julia Roberts flick, it didn’t pack the heart that “Dark Waters” does. I think a lot of this comes from the fact that Mark Ruffalo is not only a talented actor but he has been, and is, very vocal about the world’s environment. I imagine him hearing the pitch for this film and just saying “yes.” Intentional or not, Ruffalo’s personal passions inhabit his character, and you feel that passion.

Ruffalo is joined by a strong cast of supporting actors, including Hathaway, Robbins (in only his third film in five years), Victor Garber, Mare Winningham and a grizzly Bill Pullman. The script, based on a New York Times magazine article, is strong but not preachy. The direction is strong and Mr. Haynes keeps the film flowing smoothly over it’s two-plus hour length.

Oddly, this is the 2nd time Mark Ruffalo has taken on DuPont. He ended up on the wrong end of a gun in “Foxcatcher” so maybe this film was his way of getting even!