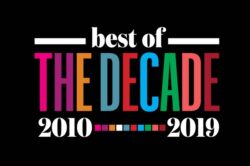 This past week Media Mikes celebrated their 10th Anniversary. It seems like only yesterday when Mike Gencarelli and I, who were at the time writing for other websites, decided to start our own. We were Movie Mikes for awhile, until Mike G. had the brilliant idea of helping to promote the upcoming AMC series “The Walking Dead.” His interview series put a big spotlight on the site and convinced us that, rather than be a movie inclusive site, we would cover the entire spectrum of Pop Culture. Hello, Media Mikes.

Since that time we (Mike G, myself and our amazing staff of writers) have reviewed over 1,000 theatrically released films and almost another 2,000 films on DVD/Blu-ray. We’ve told you what we’ve liked and what we haven’t. This week, Jeremy Werner and I have compiled our lists of the Best Films of the past decade. Let us know if you agree with us or if there was a film you think we missed.

Michael A. Smith’s 10 Best Films of the Decade

“1917“ Might as well start with the most recent of the group. An intriguing story that takes you along with it, thanks to the brilliant direction of Sam Mendes and the amazing Oscar-winning Cinematography by Roger Deakins.

“The Girl With the Dragon Tattoo“ David Fincher at his best. I had not (nor have I) seen the original Swedish trilogy but I walked out of this film stunned by Fincher’s handiwork.

“The Birth of a Nation“ Due to negative publicity surrounding filmmaker Nate Parker, this film never got the true recognition it deserved. A tour-de-force for Parker who not only directed and co-wrote the film but starred in it as well.

“All the Money in the World“ Director Ridley Scott took a huge gamble when, due to the negative publicity surrounding star Kevin Spacey, and with the film already completed and awaiting release, he recast Spacey’s role with Christopher Plummer and re-shot all of Spacey’s scenes. Plummer would go on to receive an Oscar nomination for his work.

“Bohemian Rhapsody” THIS is what a bio-pic should be. The story of the greatest front man in Rock and Roll history with a brilliant, Oscar-winning performance by Rami Malik. This is the film ROCKETMAN wanted to be.

“Get Out“ Jordan Peele re-wrote the rules on horror films with this Academy Award winning masterpiece. He continued on a roll with his follow-up film, “US.”

“Les Miserables“ Hugh Jackman may be the Wolverine to most of the world but to me he delivered his best performance ever here.

“Skyfall” Sean Connery will always be the definitive James Bond, but what Daniel Craig has brought to the character is nothing short of brilliant. His final appearance as Bond is due this year. Bring on Idris Elba!

The Marvel Cinematic Universe. This 23-film series (I’m including this past year’s “Spider-man: Far From Home”) is sure to be a blueprint followed by studios until the end of time. When Robert Downey, Jr informs the smug Thanos “I am Ironman” at the end of “Avengers: End Game” the emotional roller coaster takes one more powerful dip.

Instead of the stereotypical Top 10, I cheated a lot on my “Best of the Decade” list. Mainly because I find it incredibly difficult to narrow down my choices to a top 10, much less a top 15. So I created three lists, and put them in no particular order, so I can share my love for these movies that still resonate with me in 2020. I also didn’t want to reveal any biases that I may have on this list, so I didn’t include any description as to why I adore these films.

Best of the Decade

So Weird, Shocking, or Unexplainable, they have to be mentioned, even if they aren’t great:
“Climax”
“Mandy”
“Sorry to Bother You”
“Mom and Dad”
“One Cut of the Dead”
“The Neon Demon”
“The Greasy Strangler”
“mother!”
“Hobo with a Shotgun”
“We are the Flesh”

Coming up with a top ten list for a year is difficult enough, but it is at least ten times more maddening to finalize the best of a decade! So, I cheated a bit and added five honorable mentions. As I looked back, I picked those that pushed the envelope in some way or left an impression with me that still reverberates to present day. Beginning with #10…