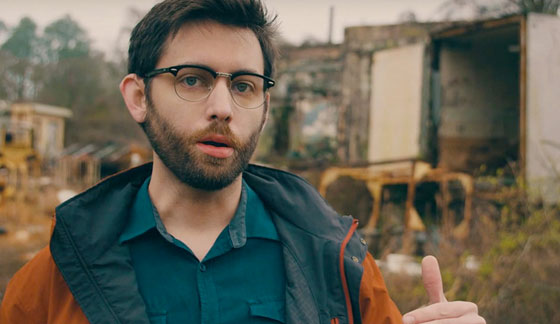 I used to work as a morning news producer in the Kansas City metropolitan area. One of the strangest things I ever came across during my time was during the closure of the Wentworth Military College in Lexington, Missouri. Cpt. Scott Nelson, an instructor at the former private university, believes to have tapped into the language of Bigfoot (or is it Bigfeet?). He believed in it so thoroughly, he served as a keynote speaker at several Sasquatch conventions. I guess what I’m trying to say is, not every Bigfoot believer is some backwoods simpleton. That’s one of the few charming takeaways you’ll get as well if you happen to catch “The Vice Guide to Bigfoot.”

Vice reporter Brian (Emond) loathes his job. He entered journalism in hopes of tracking down a juicy story or saving the world. Instead he’s chasing after clickbait stories and highlighting war torn Crimea’s craft beer scene. Brian’s constant in life, other than the terrible stories he reports on, are his cameraman and producer, Zach (Lamplugh). Brian reaches his breaking point when the two are tasked with going on a hunt for the infamous, Bigfoot, along with Youtube Sasquatch hunter Jeff (Stephenson).

“The Vice Guide to Bigfoot” is almost a mockumentary in the same vein of “What We Do in the Shadows,” but it’s more focused on mocking other things, like the current state of journalism and Vice’s attempts at it. It also has a lot of humor at the sake of online cryptozoologists, hillbillies and social media. While there is a lot of comedy, at a character’s expense, the film is never cruel. Everyone is given their own backstory that’s sympathetic, so that they can have their own form of redemption by the film’s end.

In a lot of ways, the movie is far from being about Bigfoot which works to its benefit. Especially since some found footage or mockumentaries prior, like “Willow Creek,” more or less tread familiar tropes despite a change of scenery. While it’s a pretty damn funny movie, it’s hard to see myself watching this again by myself. I may watch it again if I want someone else I know to watch it, since some jokes work better with a group. In some ways that’s a knock at the movie, but I feel that it’s sufficiently funny and entertaining enough, that it’s worth a watch.