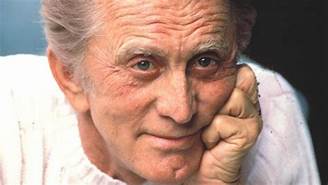 Kirk Douglas, one of the last remaining stars from Hollywood’s Golden Age, died today at the age of 103.  He leaves behind not only an amazing legacy on screen but one off of it as well.

Born Issur Danielovitch Demsky on December 9, 1916 in Amsterdam, New York, to Russian immigrant parents, the family adopted the last name of Demsky, which was the last name taken by his uncle, who came to America before his parents.  He spent his younger years working several jobs to help support his family – he had six sisters – and did so up until he joined the United States Navy.  Prior to enlisting he legally changed his name to Kirk Douglas.  He served on a submarine during World War II and was discharged in 1944 due to injuries sustained during an accident.

He began his acting career when he was granted a scholarship to the American Academy of Dramatic Arts.  He was able to support himself, barely, by doing a lot of radio work.  He made his stage debut when he replaced Richard Widmark in “Kiss and Tell.”  He made his film debut in 1946 after a former Dramatic Academy Classmate named Lauren Bacall recommend him to a director.  That film, “The Strange Love of Martha Ivers,” co-starred Barbara Stanwyck and help launch his extraordinary career.

Always enjoying his work in the theater, Douglas made his Broadway debut three years later.  That same year he starred in the film “Champion.”  His performance earned him his first of six Academy Award nominations.

But it was more than his film work that Douglas will be remembered for.  Despite Dalton Trumbo’s name on the Hollywood “blacklist,” Douglas, who was also the executive producer of “Spartacus” not only hired Trumbo to write the screenplay for the film but gave him screen credit.  Douglas often said that hiring and supporting Trumbo was the proudest moment of his career.

Douglas bought the rights to the Ken Kesey novel “One Flew Over the Cuckoo’s Nest” and in 1963 had it adapted into a play, in which he starred.  He tried for many years to produce a film version of the play but could never find the monetary backing.  He gave the rights to the property to his son, Michael who, with producer Saul Zaentz financed the 1975 film version.  Though Douglas had played the main character of Randle McMurphy on stage, he was deemed too old to play the role on film.  The part went to Jack Nicholson, who won his first Academy Award for his performance.  The film went on to earn nine Academy Award nominations and became the second film in history to win the top five Oscar categories (Picture, Director, Actor, Actress and Screenplay).

In 1996 he was given an honorary Academy Award in recognition of his amazing career and for being  a creative and moral force in the motion picture community.

Douglas was married twice and is survived by his wife Ann, who will amazingly turn 101 in April, and sons Michael, Joel and Peter.  His youngest son, Eric, passed away in 2004.