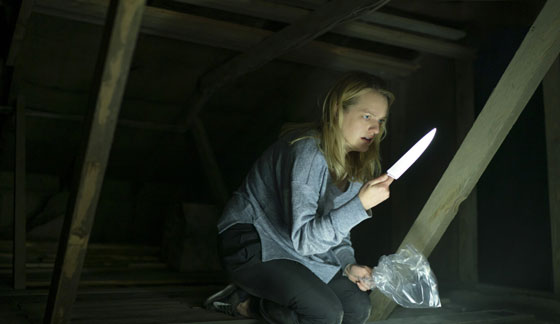 There’s a great joke I first heard in the eighth grade that deals with a mishap involving Superman, Wonder Woman and the Invisible Man.  I can’t relate it hear but believe me, the punchline is killer.  So is the latest incarnation of the Invisible Man.

We open on a couple in bed.  As Adrian (Jackson-Cohen) sleeps, Cecilia (Moss) gets up, gathers some things and makes her way quietly out of the state of the art house.  Doing her best to avoid cameras and not set off alarms, she makes her way to the road, where a ride is waiting.  But she will soon find out that you can’t run away from some things, no matter how hard you try.

Genuinely terrifying, with a tour-de-force performance by Ms. Moss, “The Invisible Man” starts off slowly and clumsy.  20-minutes in I resigned myself to the fact that I was going to see a rehash of “Sleeping with the Enemy,” only with a Patrick Bergin that I couldn’t see.  But just as that thought came into my head, writer/director Whannell flipped the switch, taking the film into directions I never would have imagined.

There have been many attempts at filming H.G. Wells’ story of a man with the power of invisibility, from the 1933 Universal Horror Classic “The Invisible Man” starring Claude Rains to the 2000 Kevin Bacon-starrer “Hollow Man.”  Heck, even Kurt Russell and Chevy Chase have taken comedic shots at the story.  But here, the main theme is terror, especially to an audience who is on the edge of their seats, intently staring at the screen and looking for the slightest hint the bad guy is there.

Moss is a revelation here.  Best known for her television and streaming work (“Mad Men,” “The Handmaids Tale”) and a strong supporting turn in last year’s Jordan Peele horror masterpiece, “Us,” she has the unenviable job of basically interacting with a character that the audience never sees.  Whether arguing, pleading or physically fighting with our villain, it’s just her on the screen, yet you feel her terror, especially when she is violently struggling with an entity that she (nor the audience) can see.  Mr. Whannell, no stranger to horror thanks to his involvement in the “Saw” and “Insidious” film series, keeps the pace moving (after the first half-hour) and uses his camera as an almost additional character.  The musical score, by Benjamin Wallfisch (“IT,” “Bladerunner: 2049), helps set the mood as well.  The result is the most terrifying film since the aforementioned “Us.”  By all means, go see it…even if you can’t SEE it!

One Reply to “Film Review: “The Invisible Man””