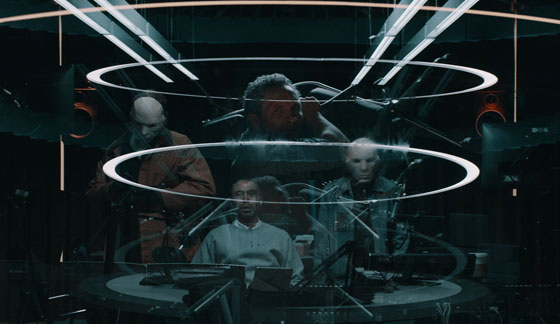 A London radio station transforms into a pressure cooker when a late night host is held captive in his own recording studio. What starts as a not-wholly-unexpected hostage situation for the controversial host quickly reveals the thugs have more personal than political reasons for their chosen target. Director Pedro Alonso’s Feedback, which is now out on VOD and releases February 18th on DVD, is a tightly orchestrated thriller that hinges on a strong leading performance from Eddie Marsan despite a questionable point of view.

Dolan Jarvis (Marsan) has been attacked before. Anchoring a late night radio show called “Grim Reality” where he rages on all things political (Brexit, Russian election tampering, et al), he isn’t as shaken as the average person returning to work after having been attacked by angry listeners. That said, his producer (Anthony Head) is still angling to force a co-host on him in the form of rocker Andrew Wilde (Paul Anderson, “Peaky Blinders”). As he starts his usual broadcast, a group of masked thugs trap Jarvis in his studio and threaten him to stick to their exact script when Wilde arrives. At first Jarvis balks but he gets on board when he realizes his daughter, who also happens to be in the radio offices that night, as well as his young studio technicians are threatened as well.

What should be a limiting contrivance–holding all action captive in a recording space–is actually one of the film’s strengths. Alonso goes a long way to making sure that the viewers feel Jarvis’s claustrophobia as his assailants bear down on him. The pristine studio also makes for a good visual contrast with the acts of violence. Then in the latter stages of the film, he keeps throwing Marsan further into situations where he feels more and more like a rat in a maze. It’s highly stressful and highly effective.

Marsan meanwhile as the victim gains a lot of sympathy when he’s first caught that pays off in dividends for the film. Alonso pulls a bit of a switcheroo by firmly placing the audience on Jarvis’s team so to speak before the ostensible villains of the piece get him and Wilde to expose more of their past digressions on air. If it weren’t for Marsan and Anderson’s respective charisma, I think this film would have run a real risk of losing viewers completely when all is said and done. Your mileage may vary, but despite where the film takes the characters, it still delivers several gasp-inducing thrills and is worthwhile for Marsan’s performance.