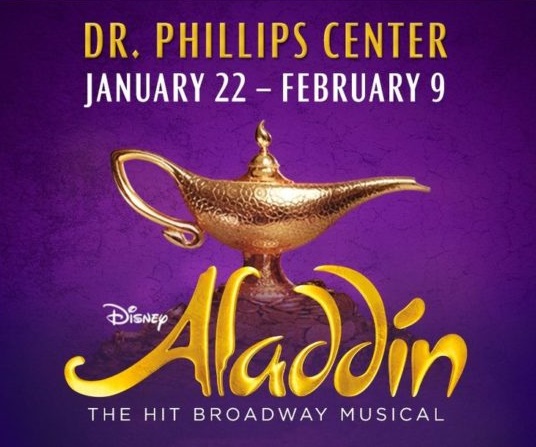 “Disney’s Aladdin” is one of my favorite movies and it is also one of the only Disney plays that I haven’t seen on Broadway. It opened at the New Amsterdam Theatre on March 20, 2014 and since then has become the 11th highest-grossing Broadway production of all time (as of May 2019), grossing over $400 million…and still going strong. The show is currently running from January 22nd through February 9th at the Dr. Phillips Center and it is a MUST SEE for the whole family.

Official Premise: From the producer of The Lion King comes the timeless story of Aladdin, a thrilling new production filled with unforgettable beauty, magic, comedy and breathtaking spectacle. It’s an extraordinary theatrical event where one lamp and three wishes make the possibilities infinite. Aladdin features all your favorite songs from the film as well as new music written by Tony® and Academy Award® winner Alan Menken (Newsies) with lyrics penned by the legendary Howard Ashman (Beauty and the Beast), Tony Award winner Tim Rice (The Lion King, Aida), and book writer Chad Beguelin (The Wedding Singer). Directed and choreographed by Tony Award winner Casey Nicholaw (The Book of Mormon, Something Rotten!), this “Fabulous” and “Extravagant” (The New York Times) new musical boasts an incomparable design team, with sets, costumes and lighting from Tony Award winners Bob Crowley (Mary Poppins), Gregg Barnes (Kinky Boots), and Natasha Katz (An American in Paris).

Orlando native, Michael James Scott, played the role of the Genie and easily stole the show. Michael isn’t new to playing this role after though after being apart of the original Australian Cast (2016-2017), as well as taking on the U.S. National Tour (Jan-Aug 2018), took over the West End (Aug 2018-Feb 2019), and Broadway (Feb-Sept 2019). So as far as I am concerned Michael James Scott is the Genie. I literally loved every second he was on the stage. Such energy and such love for his craft.

Speaking of returning cast Jonathan Weir, who played Jafar in the original US tour cast as well taking over the reigns on Broadway. There was no shortage of talent on this stage. Jonathan was a riot with his companion Iago, played by Reggie De Leon. Together they both commanded the stage. Jonah Ho’Okano, who plays Aladdin, is also fresh off the boat from playing the lead in the Disney Cruise Line version of “Aladdin: A Musical Spectacular”. So he is also no stranger to the character.

The costumes are outstanding. There are so many quick changes that will leave you amazed as to how it is done. The colors are just so vibrant from the costumes to the set, which are also super elaborate – especially the Cave of Wonders. I absolutely loved the Cave of Wonders set. It was stunning and so well put together. Also “Whole New World” song was super impressive with the flying carpet, which I have no idea how it was done. This was a really beautiful moment of the evening.

Since this show running for a few weeks at Dr. Phillips Center, there are still plenty of time to get great seats for upcoming shows and Media Mikes had the tips for you to experience this amazing show. There are still great seats available for the following shows on Wednesday January 29th-Friday January 31st and from February 4th through Saturday February 8th. If you can make any of those shows, I cannot recommend any more to not miss this show. I had a smile on my face from the moment it started until the moment it ended. Definitely some magic happened at Walt Disney Theater.