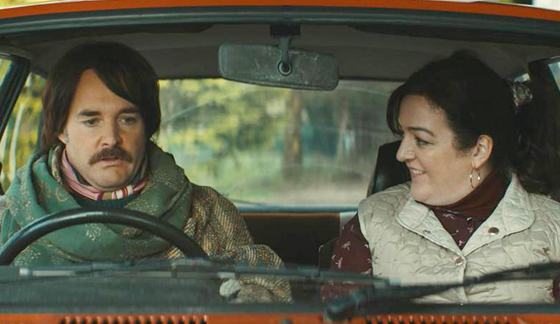 Driving instructor Rose has a bit of a secret. Only a few people know about it, and every once and awhile, someone who is told about that secret will seek her services. That secret is her ability to communicate with the dead. But an even bigger secret, is the key to her psychic abilities which is her father, who is no longer with her. She saw the disastrous and absurd result of those abilities and refuses to use them, even if it’s for good. That is until a cute, recently widowed father, Martin (Ward), comes along because he’s been pestered by his recently deceased wife.

There’s more to the spiritual rom-com “Extra Ordinary” than just Rose and her pursuit of happiness. Causing an equal amount of commotion in the background is a one-hit wonder musician, Christian (Forte). He’s looking to rejuvenate his deceased rock career, but not with a catchy new song. He’s on the hunt for a virgin sacrifice that’ll be offered up to Satan during the blood Moon. He enters Rose’s realm when the virgin he has an eye on is Martin’s teenage daughter.

One of the biggest strengths about this film is its irreverent humor. It’s never too peculiar, it’s never too crass or mean towards it’s cast and it seems to hover like a specter in this gray area where it remains charming, no matter how outlandish it gets. Credit goes to the directors and writers, Mike Ahern and Enda Lougman, but an equal amount goes to Forte and Higgins. Higgins provides this warmth and sincerity to Rose that’ll charm your pants off, or hopefully Martin’s. Forte, a mainstay in the bizarre comedy scene of America, taps into his natural off-the-wall humor and makes every scene with Christian an absolute delight.

As much as I’d love to give this ghostly rom-com a higher grade, it still feels like the plot has been stretched a bit too thin. If it wasn’t for the consistent jokes, this movie could have easily outstayed its welcome, and nearly does. It easily could have benefited from having a five to 10 minute shave off the runtime. However, when things start to feel a little bit too long the final third of the film, “Extra Ordinary” goes straight for the comedic jugular in its final act. So without that ending, as well as the performances, this movie came precariously close to failing to live up to its title.

From the silly things ghosts inhabit to Rose’s attitude towards life, this film is a pleasant surprise. It may be a hard sell, especially since the movie begins like a “Tim and Eric” sketch and Forte’s gonzo slapstick can be a bit much for some. If you find “Extra Ordinary” on a streaming service late at night, I guarantee it’ll find a way to put a smile on your face.