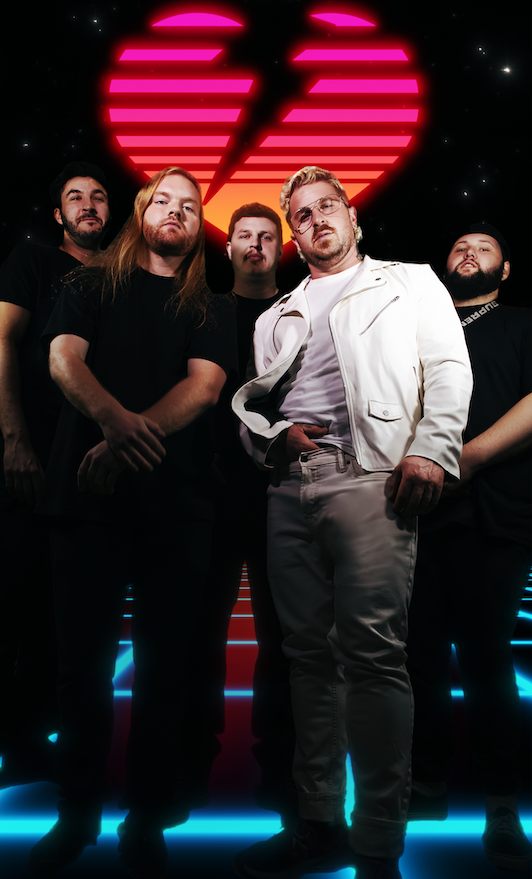 California based Heart to Heart have signed with InVogue Records.

The band will be releasing a new single this month along with an EP in the coming months.

Quiet is nice. Quiet is comfortable. But quiet is dangerous, too — because quiet is the perfect disguise for a revolution.

Nick Zoppo knows this. Zoppo is the frontman of Heart to Heart, an energetic California rock quintet that formed a decade ago and has toured North America countless times. Even though the band cultivated a dedicated following and released two stellar full-lengths, Heart to Heart slowly receded from the music scene, laying mostly dormant the past few years. What made Zoppo put his passion on hold? His other passion: professional wrestling.

“In 2015, I moved to Chicago to train with WWE Superstar Seth Rollins,” Zoppo explains, “and three months turned into three-and-a-half years. In that time period, we were still playing a few shows and were still sending music ideas back and forth, it was just a little more tough with me being in the Midwest. I inevitably had to move back to California, and once I came back, we started rocking and rolling again.”

Zoppo’s alter ego, the “Outlandish Zicky Dice”, took the independent wrestling scene by storm, landing him bookings all across the world. Inspired by his character, Zoppo returned to Heart to Heart with a renewed passion, and his fellow bandmates — guitarist/vocalists Johnathan Hayes and Alex Lulow, bassist Justin Bratcher, and drummer AJ Wright — were just as excited to get to work.

The result is Heartbreaker, a six-song release that’s as musically aggressive as it is inherently melodic. It’s the kind of stuff that would stop you in your tracks at Warped Tour, or would make you open Shazam on your phone to identify the song if you overheard it coming from someone’s car stereo.

“Heartbreaker is a new, completely different, mature sound for Heart To Heart,” Zoppo says. “This record means the most to me, especially lyrically. I think of real pain in my life that I connect to music, and that’s what I draw on when writing lyrics.”

Look no further than Heartbreaker’s opening track, “Ø Love,” which finds Zoppo keenly observing, “We all learn from loss and pain and suffering.” Or check out “Someone Else,” which includes a potent bit of dialogue from Eternal Sunshine Of The Spotless Mind. Or just press “play” on standout track “Insufferable,” which sounds like the dissolving of a relationship in real time — and according to Zoppo, it was.

“It was literally what we were going through at the time,” he says. “I am telling the story as it happens — we were breaking up while I was in the studio. I’m speaking my mind and not holding anything back.”

It’s clear that Zoppo approaches each song as if it could be his last, using his lyrics as a way to directly speak his mind, no matter who may get caught in the crossfire. His approach may ruffle a few feathers (“I get texted from the subjects of songs sometimes,” he says with a chuckle), but it also allows for deeper bonds to be formed, as you can hear in the emotionally gripping “The (Q)uiet War,” a passionate song about mental health, which includes a real voicemail message from a musician friend of Zoppo’s who was near the point of ending his own life.

“You can just hear the true emotion and true pain in it,” he says of his friend’s confession, assuring that the friend is in a much better headspace now. “It’s a war inside your head daily. Even me — I play this character that’s full of himself in the wrestling ring, but I’m also trying to remember if I took my depression medication this morning. I like being a public figure that can talk about these things openly, and hopefully try to motivate someone else to remind them there’s a light at the end of the tunnel. It’s completely okay to not be okay.”

Zoppo not is only constantly working on himself, he is also helping others — the singer/wrestler is currently working toward his masters degree in special education, and he makes time in his busy schedule to work in a special ed class as well. All of this goes into making Zoppo a surprisingly vulnerable frontman — but while vulnerability might shine through in the studio, once he gets onstage, all bets are off.

“When I would go onstage, I would be this character that eventually turned into Zicky Dice,” he says. “Angus Young from AC/DC used to say he would black out onstage, and I feel that’s the same for me. I’m all about entertaining the crowd. Yeah, they’re there to listen to music. But this is a chance to give them a performance. I look forward to sharing these songs with the world as an older, more mature me and a more mature band.”

With Heartbreaker, Heart To Heart are ready to reintroduce themselves to the world. They’re older and wiser, sure; they all carry a few more scars, both physical and emotional; but their musicianship is more advanced than it’s ever been, and they’re ready to kick the listener in the face, sonically speaking.

“We really took our time and tried a lot of different things we haven’t done musically before,” Zoppo says. “New vocal techniques, harmonies, guitar overlays… We were in the studio for months, because we knew Heartbreaker had to be something incredible. Everyone here has a lot of shit on the line. We all really want to be our best.”

Quiet has ended. A revolution is about to begin. Heart to Heart are ready for you. Are you ready for them?