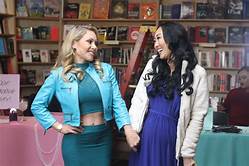 You can’t get away from “them.”  The Kardashians.  The various Housewives of various counties.  “The Bachelorette.”  For good or bad, reality television has grabbed a major part of the world’s attention and, like it or not, it’s here to stay.

London Logo (Ms.West) is a CELEBRITY.  I use all caps to emphasize her status.  Known for her frequent magazine appearances, annual “nip slip” awards and exiting cars sans underwear, London is a mix of Paris Hilton and Jessica Simpson rolled up into one.  When things begin to go bad for London, who finds her fame declining with the appearance of the large-assed Kim sisters, she agrees to participate in a documentary about herself which will open the eyes of everyone involved.

As a critic, “Reality Queen!” is the kind of film you love to discover.  Cleverly written by a gaggle of writers, including director Bernheim, the film is an amazingly precedent look at the state of “fame” today.  Nothing is sacred as zinger after zinger is thrown out and the jokes hit much more often then they miss, a testament not only to the script but to the cast.

As London, Ms. West proves herself to be a fine comedienne.  Movies like this often rest on the shoulders of the actors who, if they don’t deliver the lines properly, bring the production down to the level of any recent National Lampoon film that didn’t begin with the words Van and Wilder.  She is also breathtakingly beautiful.  Denise Richards co-stars as London’s best friend, an actress named Angelina Streisand.  She also shows fine comic timing.  Other standouts include Loren Lister as London’s put-upon publicist, Cliff De Young and Jill Jacobson as London’s parents, the amazing Charles Fleischer as a Larry King-ish television host, Kate Orsini as the documentary reporter and the late John Witherspoon in one of his final film appearances.

Mr. Bernheim keeps the pace moving smoothly and I must give credit to he and production designer Ryan Henneman, whose production values are amazing for a film you normally wouldn’t consider “big budget.”  If you’re not in the mood for football this weekend, I highly recommend checking out “Reality Queen!”