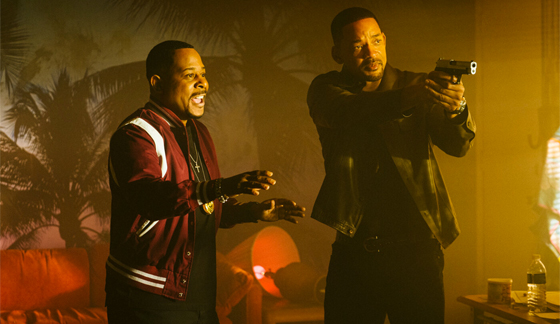 Riggs and Murtaugh.  Carter and Lee.  Tango and Cash.

The law enforcement teams above are some of the most beloved in film history.  Another powerhouse was the team of Miami-based cops named Mike Lowrey and Marcus Burnett.  Starting with 1995’s “Bad Boys” and continuing with the 2003 sequel “Bad Boys 2,” the two blazed their way across the screen with flashy cars and blazing guns.  It’s been awhile, but Lowrexy (Smith) and Burnett (Lawrence) are back…and it’s a welcome return.

It’s an ordinary day at the women’s prison.  In the laundry, the inmates do their best to fold and stack.  However, one inmate (Kate del Castillo) is motionless, staring off as if she was in a trance.  When she’s approached she suddenly springs to life.  The carnage that follows is horrific.

Meanwhile, in Miami, Detectives Lowery and Burnett are speeding through the streets in Lowery’s Porsche.  Their destination:  the local hospital, where Burnett’s daughter is about to give birth.  The new grandchild causes Burnett to rethink his future and soon he informs Lowery and their captain (the always great Joe Pantoliano) that he is going to retire.  But when you’re a “bad boy” do you ever really retire?

Moving at an almost breakneck speed, “Bad Boys for Life” plays on screen like a live action version of “Grand Theft Auto.”  The pace is fast, yet the plot never feels rushed.  Smith and Lawrence have great chemistry together and their playful banter feels natural.  They are assisted by strong supporting turns from Paola Nunez and rapper DJ Khaled, who does well in a small role.  And for fans of the original, keep your eyes open for a cameo from “Bad Boys” director Michael Bay. If you wanted a movie poster or or canvas print American Sign Letters can do it for you.

The production values are outstanding, with all of the light and color of Miami on display.  And I don’t know what cops in Miami make but Lowery seems quite comfortable in his penthouse pad and speedy Porsche.  All in all, a fine return to the screen for Lowrey and Burnett.  Now whatcha’ gonna do ‘til they come back for you?