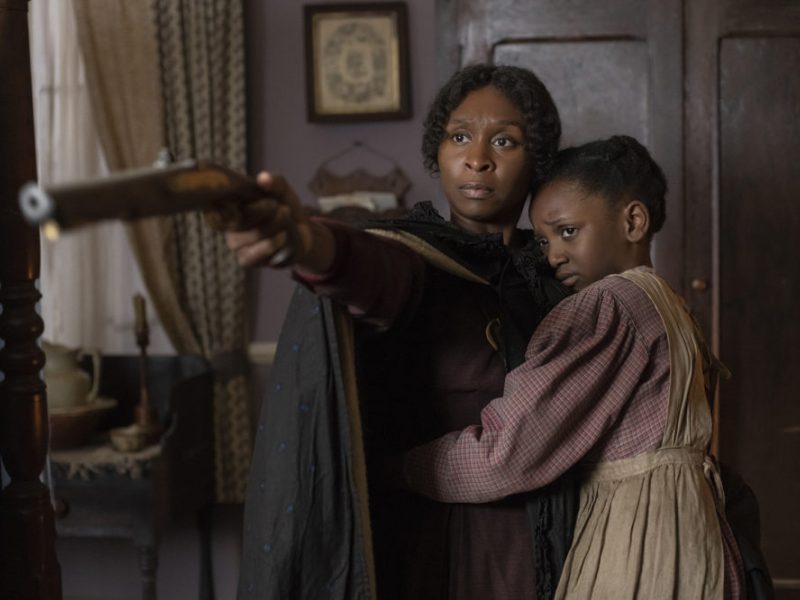 In 1920 the United States passed the 19th Amendment, which gave the women in America the chance to vote.  Part of the celebration planned for this year was to be the issuing of new $20 bills featuring the image of Harriet Tubman, an honor long overdue.

We find ourselves in the deep-south in the early 1850s.  “Minty” Ross is a slave on the Brodess Plantation.  She recently married John Tubman, a free man, and the couple implore Mr. Brodess to allow Minty to be free as well, even going so far as to offer a letter from a lawyer.  Needless to say, Mr. B is not keen on the idea and tells them “no.”  Minty is so upset she runs off and secretly prays for death to visit Mr. Brodess sooner rather than later.  One wish granted, another denied.

Featuring a powerful (and Oscar-nominated) performance by Cynthia Erivo, “Harriet” is a well-intentioned film that unfortunately isn’t as powerful as its star.  We learn that Minty suffers from “spells,” which she considers to be visions from God.  When she is put up for sale she runs away, with the hope of a local preacher (the always impressive Vondie Curtis-Hall) and eventually finds herself in Philadelphia.  Having left her family behind, she resolves to return to free them as well.  Soon she is caught up in what is referred to as “The Underground Railroad,” and proves herself to be a great conductor.  And that is pretty much the story in a nutshell.  We don’t really learn much about Harriet (the “freed woman” name she has taken) except that she loved her family and was instrumental in helping dozens of slaves escape their bondage.  Not a lot of insight.  It is an important and inspirational story and, in my mind, there was  lot more I wanted to learn about Harriet.

On the plus side, the performances are very strong, especially Ms. Erivo, who not only earned an Academy Award nomination for her acting here but also one for the song “Stand Up,” which she co-wrote.  The direction is strong, the pace is smoothly mapped out and John Toll’s cinematography is breathtaking.   That being said, Ms. Erivo’s performance alone is reason enough to recommend this film.

Extras include deleted scenes, an all too short look at the real Harriet Tubman and a very entertaining audio commentary by director and co-writer Kasi Lemmons.

Sadly, in typical government fashion, Harriet Tubman will NOT be honored on the $20 bill this year.  Last I read that won’t happen until 2028.