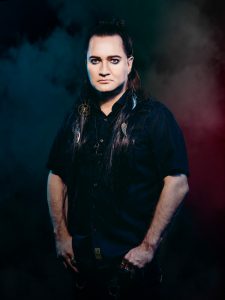 Amberian Dawn will release their eighth studio album, “Looking For You” on January 31st via Napalm Records and enter a new, but still familiar sounding musical universe, mixing the best of both worlds into a new genre: ABBA-Metal! The album’s multi-faceted and emotional lyrics provide a suitable background for soaring guitars and elegant classical interludes which showcase the bands shift from power metal to a more symphonic metal sound. Media Mikes had the chance to speak with the bands keyboardist Tuomas Seppala recently about the band’s new album, the changing of their style and working with Finnish artist Kebu.

Adam Lawton: Can you give us some background on the new album “Looking For You”?

Tuomas Seppala: “Looking For You” is a really nice album with a new and fresh sound. After releasing our previous album, I had a long writers block. I just couldn’t write good stuff with the “old style” anymore. After six or seven months or something, I realized that I need to change something so that I would be able to compose good stuff again. Then I started to compose a kind of synthesizer – disco music and that felt really good. Then I introduced a couple of those new songs to band mates and I was surprised that they liked the songs and also said that those songs could be easily converted to AD songs. That’s how I started to make music again and with a different kind of style. Now there’s only one “traditional” AD song on this album, a symphonic metal song “Symphony Nr.1 Part 3 – Awakening”. I got Fabio Lione of Rhapsody to make a guest appearance on that song. It was great.

AL: The band’s sound has gone through changes over the over few years. Was that a natural transition or something that was done by design?

TS: It’s been a natural transition, but it’s not been easy all the time. I’ve had several writer’s blocks after I’ve finished with an album and trying to start working with new songs. I always write music based on the feeling I have for it and I usually can’t force myself to do anything else. For example, if I’m not in the mood for power metal, I simply cannot write any good power metal material. Maybe some average stuff, but that’s never good enough for me. All the stuff I’ll write and publish must be just perfect to me (at that time). But it’s obvious that my point of view for music has changed during all these years and I wouldn’t be happy with the stuff I wrote 10 years ago, if I had been writing that exact same stuff right now.

AL: Where did the term “ABBA Metal” come from?

TS: That’s just something we came up with. I’m not sure whether I invented the term or if I just saw the term used on chats and social media first. Anyways, I like the term and it’s really a good genre to describe AD’s current style.

AL: Was the decision to cover “Lay All Your Love On Me” made before or after the creation of ABBA Metal? and why did you choose this song?

TS: I had been preparing this cover song for many years before we actually decided to record it. Also, the ABBA-metal genre came up at some point after I had all of the songs ready for new album. I knew that we really need to start using this ABBA-metal genre because it’s really what this music is all about.

AL: Being a keyboardist what was it like working with fellow instrumentalist Kebu? And what was that process like?

TS: We had really good co-operation with this album. Kebu has this huge arsenal of vintage keyboards and together we finalized the keyboard sounds with his gear. Some of the sounds and tones are made by Kebu and some of those are made by me. It’s a good combination and I think we can work together in the future too. In short, the process was like that – I first made the arrangements for keyboards and then we decided that which parts were going to be played with my gear and which parts were going to be played with his synthesizers. Kebu used a lot of time to develop those keyboard sounds and presets. I also used ABBA’s Benny Andersson’s personal synthesizers on some songs. I recorded some parts at his studio in Stockholm.

AL: Are there any plans in place to tour behind the release?

TS: We’re planning to tour later in 2020 but we don’t have anything confirmed yet. We’re probably going to tour in Europe again because that’s doable. Touring in the US is much harder to make happen.

To Order your copy of “Looking For You” click here: