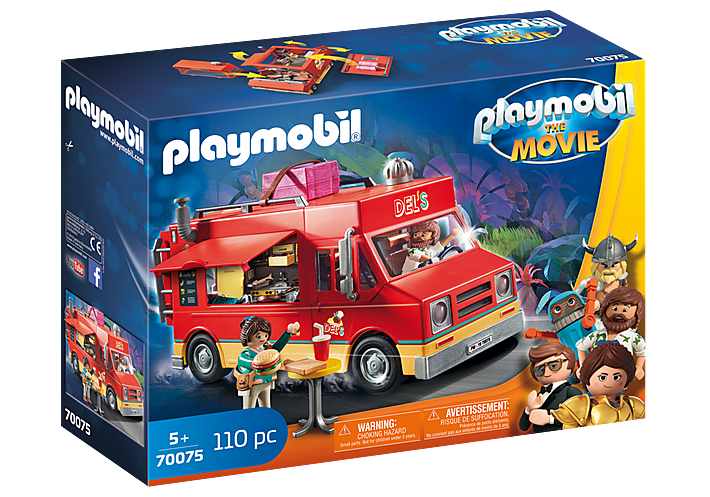 By chance siblings Marla and Charlie are drawn into the magical Playmobil universe and separated. To find Charlie again, Marla must embark on the adventure of a lifetime. Fortunately she meets Del, a crazed food truck driver, who helps her to find her way in this fantastic world with its wacky rules. Matching the cinema launch, Is the “Del’s Food Truck” play set consisting of film characters Marla in college jacket and Del, Del’s red food truck with equipment, sleeping serum, magic hay and many other extras that let you relive the adventure of the film and beyond all from your very own home.

Playmobil continues to make their mark on the always growing licensed toy market however this time it’s a license of their own creation. Based off the recently released “Playmobil The Movie” youngsters and fans of the film can relive all hysterical action from the film. We had a chance to check one of the key pieces in the set and from the movie “Del’s Food Truck”. Packed with tons of cool details and accessories this play set will have you up and going on adventures in no time. From a parent’s stand-point there is quite a bit of assembly and sticker-ing which needs to be done so be prepared for several “are you done yet?” questions from your young ones. Also I do want to point out that a lot of the parts in this set are quite small so you will defiantly want to make sure your loved one is passed the “putting stuff in the mouth” phase before handing this over However, once you have the truck assembled and all the food in-place you probably won’t see your loved one for a bit as they surely will be busy providing food and fun to other toys in their expansive collections. Our in-house toy tester Ian provided spicy burritos and magic hay to anyone he could. I think our dog Damon even took part in an adventure or two which was quite entertaining to say the least given his rather anti-social personality.

I can’t say it enough; this is probably one of the most detailed sets to date from the fine folks at Playmobil. From labeled food cans to Del’s removable rubber slides there was no expense spared. I would have like to have seen a few less stickers to put on (mainly the really smalls one) however once on everything looked great. Scale wise everything matches to previous Playmobil sets allowing for seamless play between other sets allowing you and/or your loves ones to create endless scenarios time and time again across all Playmobil licenses.