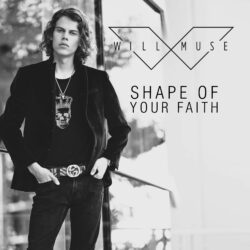 The first thing that popped into my head when Will Muse got on the phone was “no way this kid is 16!”  With a voice, and a heart, that belies his youth, Muse is quickly becoming one of the most exciting talents to watch in 2020.

The music video for his first single, “I Can Change,” has been viewed more than two million times.  His sophomore release, “Spend,” was released in April of this year and received heavy airplay on Radio Disney.  This past month the singer/songwriter released his third single, an expressive song about falling in love called “Shape of Your Faith.”  He also created the Music for Wishes Foundation, which helps the Make-a-Wish Foundation grant wishes for children in his Somerset, Kentucky town.  Again…no way this kid is 16!

Will recently took some time out of his busy schedule (he attends school daily, concentrating on his music once homework is done) to talk to me about his new song and his plans for the new year.

MIKE SMITH:  What triggered your interest in music?

WILL MUSE:  When I was growing up my parents were always listening to a lot of cool, classic music.  It definitely influenced me.  From the age of three years old I was listening to Guns and Roses, Pearl Jam, Aerosmith…great classic rock like that.

MS:  How old were you when you wrote your first song?

WM:  Yes.  Songwriting has always been a great outlet for me to express myself and my feelings.  To explain my passions through music.

MS:  As a singer/songwriter there are two different parts of what you do.  Do you have a preference between creating and performing?

WM:  I love to create music.  To create the lyrics and the melodies.  But I really love giving a good live performance.  That really excites me.  One time I was performing my first single, “I Can Change,” and a lady in the audience came up to me after the show.  She was crying because she had been so moved and so touched by the message of the song.  It’s moments like that that bring me joy with my music.

MS:  What was the inspiration for your latest single, “Shape of Your Faith?”

WM:  I wrote it with a fun, groovy and retro vibe in mind, musically.  Lyrically I wanted to talk about how love can take different forms in the way it shapes your life.

MS:  Can you talk about your Music for Wishes Foundation?

WM:  Back in 2017 I wanted to combine my passion for music with my passion for helping people.  Here where I live in Somerset, Kentucky I saw the need for a Make-a-Wish fundraiser so we put on an event that year that consisted of a concert, a dinner and a silent auction.  Besides myself, several other artists perform at the concerts.  This past year we had Pam Tillis, which gave me the opportunity to do a finale’ song with her.  We’ve raised over $85,000.00 to help grant wishes for the local children.

MS:  What’s next for you musically?

WM:  I have a couple more singles I hope to release including a really fun duet.  I’ve also shot a few more music videos and I have a tour coming up in the spring (2020).  I’ve got a lot of great things coming up that I’m really excited about.