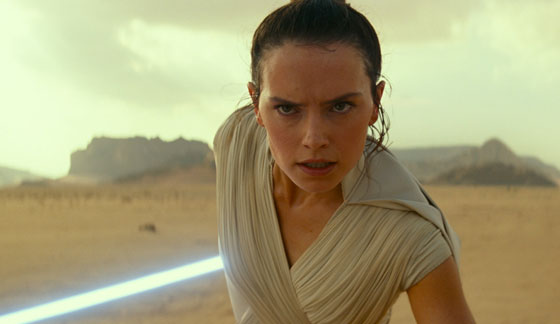 In 1977, theatre owners everywhere were excited about an upcoming film from 20th Century Fox that they were sure was going to fill their theatres for weeks.

That film was “The Other Side of Midnight.”  Based on a very popular best-selling book, the demand for the film was so great that the studio was able to do a little quid-pro-quo with the owners.  If you promise to play this little space movie we have coming out in May we will make sure you get “The Other Side of Midnight.”  That “little space movie” was, of course, “Star Wars.”  The punchline to this story is that “Star Wars” proved to be so popular that, when “The Other Side of Midnight” opened two weeks later, many theatres NEVER played it as they were still filling the house.  I’m pretty sure I can guarantee that the final installment in the original series will do the same.

Let me begin by saying this will be a spoiler-free review.  Not only because the studio asked critics not to give anything away but also because if, like me, you’ve got 40-plus years of your life invested in the saga you don’t want some pencil neck with a computer spoiling your fun.  The story begins with our heroes Rey (Ridley), Finn (John Boyega) and Poe Dameron  (Oscar Isaac) still trying to defeat the First Order, led by Kylo Ren (Driver).  While Rey continues her Jedi training, Kylo Ren is raging his way through the galaxy, hoping to confront the all-powerful Emperor, the leader of the evil Sith.  Things are getting bleak for the resistance and General Leia Organa (Fisher) is out of ideas.  Will the final pieces of the rebellion be destroyed?  Sorry, the studio won’t let me tell you!

Here’s what I can tell you.  Director J.J. Abrams, who co-wrote the screenplay with Oscar-winning screenwriter Chris Terrio (“Argo) has crafted a story that should satisfy every “Star Wars” fan in the galaxy.  Old friends return while new friends extend the story.  You would have to have a heart colder than a Wampa not to enjoy this movie.

The cast is top-notch, with the three principal actors having grown into their roles.  It is obvious they are much more comfortable here than they were in Episode VII (“The Force Awakens”).  Rey is certainly my grandchildren’s version of “Alien” crewmember Ellen Ripley, a strong, young woman that others can look up to and admire.  Fisher’s Princess Leia in the original trilogy was the same kind of character and Ms. Ridley gives her both an outer and inner toughness, though the goodness she possesses is also visible.  Both Boyega and Isaac have larger roles here.  Finn is much more decisive in his actions while it’s nice to see Poe NOT in a spaceship for the majority of the film.  The filmmakers were able to include Carrie Fisher in the story by reshaping scenes she filmed for “The Force Awakens” and it is a joy to see her on the big screen one last time.

Driver has also grown into the role.  To me he came off as a little wimpy when he was introduced in “The Force Awakens” but here he is downright terrifying.  The man has some serious anger (and family) issues and you don’t want to be near him when he snaps.  To counter the intensity of some scenes Abrams has also included some good, old fashioned humor and the jokes play well.

Visually, of course, the film is a masterpiece.  Battles between literally hundreds of ships take your breath away and the musical score, by the great John Williams, is a perfect accompaniment to the action on screen.

In the spring of 1977 some friends of mine and I wrote away to 20th Century Fox for some information on “Star Wars.”  We each received a beautiful full-color campaign book, which I still have.  I was 16 when “Star Wars” came out.  Like many people my friends and I went to the theatre not knowing what to expect and walked out hooked.  I enjoyed the films so much that half of my basement is crowded with “Star Wars” memorabilia.  I was even asked to moderate the 40th Anniversary Q&A event that was held in Kansas City.  “Star Wars” is, and has been, a very important and memorable part of my life and I must say that “Star Wars: The Rise of Skywalker” is the perfect ending to my childhood!