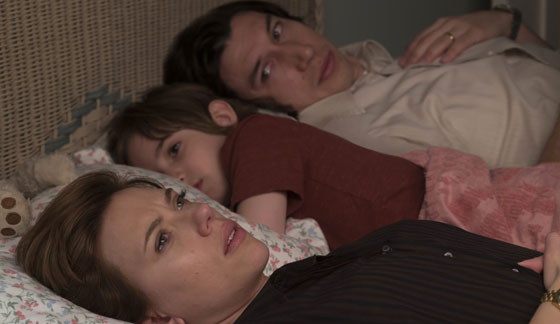 It’s an impressive feat to reach out to an audience and make them feel something, especially when those audience members aren’t able to relate to the plight at hand. I say this because I’ve never been married, so I haven’t experienced the painful complications surrounding divorce. Despite that, I felt the pain, sorrow, and heartbreak experienced throughout “Marriage Story.”

When we first meet the New York couple, Charlie (Driver) and Nicole (Johansson), they’re narrating all the little things that they like about one another. We come to find out they’re both mentally going over a list of things they love about one another. The lists were at the behest of a mediator because their marriage is falling apart. Both stay silent over the list, choosing to never read them. Charlie, a playwright, and Nicole, an actress, have decided that marriage counseling isn’t right for them, and maybe their union isn’t right for them as well. Things erode further as Nicole accepts an acting job in Los Angeles, taking their son with her. Things crumble even further once Nicole is told by a friend about a divorce lawyer.

The narrations at the beginning feel like a distant memory midway through the movie. The split reaches a point where it becomes about who can do the most emotional damage, no dime spared. Even their more cordial conversations, feel tense because they’re on the verge of lunging at one another a delivering another blow to the other’s heart. Thankfully some of the tension is undercut by sardonic comedy and moments where ancillary characters simply help the two main characters breathe.

There is no right and wrong in “Marriage Story,” because it’s all messy, just like a real-life divorce. Now granted, director/writer Noah Baumbach does a fantastic job of layering each character with relatable and detestable attributes. We see moments of selfishness and selflessness from Charlie and Nicole. Baumbach does slip up in the middle and towards the end as he tends to focus more on Charlie’s distress and misery, rather than giving the audience a peek at what kind of turmoil is going on with Nicole.

“Marriage Story” offers up two of the best performance to date from Driver and Johansson, who are simply magnetic together on-screen. The dialogue is brutal, honest and straightforward, which bats away any potentially dull moments. Their divorce is a slow-moving car crash that you can’t look away from because of how engrossing it is, but because of how well Charlie and Nicole have been written, you can only hope that they both make it out OK in the end.