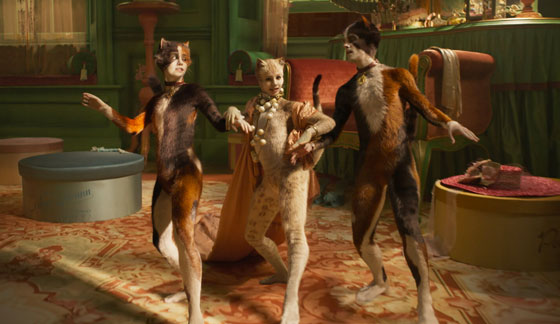 I lived on the east coast for many years – from 1982 through 1995.  I was a frequent visitor to New York City and, every time I would walk by the Winter Garden Theater I would see the words “Now and Forever.”  These words were very true when it came to the show playing at the Winter Garden: the musical “CATS,” as it ran on Broadway for a then-record 18 years!  This week, 37-years after it opened on Broadway, “CATS” has finally come to the big screen.

We open on a London street where we see a car pull into an alley.  A woman takes a bag out of the car and casually throws it towards the garbage bins.  The bag lands with a thud and begins to move.  As the woman drives off the bag is surrounded by a motley group of cats.  They open the bag to discover a young cat who is obviously frightened.  One by one the cats introduce themselves.  So begins the film adaptation of the Tony-award winning Best Musical, “CATS.”

How do I describe this film?  When the trailer first premiered many people, myself included, were confused by what the film was being portrayed as.  It seemed almost like a joke, the way the cat characters were jumping around on over-sized furniture.  But it wasn’t a joke.  Unlike the Broadway show, which takes place in a junkyard, director Tom Hooper has opened up the sets, allowing the feline characters to jump on beds, sing on library steps and even tap dance across a railroad tie.  Fun stuff, to be sure, but creepy as heck.  And while the cast gives its all, the show seems to almost come to a stop in between musical numbers.

The cast is phenomenal, featuring everyone from revered actors like Dame Judi Dench and Sir Ian McKellen to pop singer Taylor Swift.  Others spinning a yarn include Rebel Wilson, Jennifer Hudson and Ray Winstone.  Heck, even Idris Elba gets in on the action.  The actors are fine…they just don’t have shoulders enough to carry the film.

The high points here are the make-up, special effects and choreography.  Rather than follow in the footsteps of Broadway, where the cast wore unitards, here the very expressive faces of the cast are modified with whiskers and CGI.  Most of the makeup is fine, but Judi Dench comes off looking like Bert Lahr’s older sister from “The Wizard of Oz.”  The musical numbers, of course, are superb, which is a no brainer when you’re dealing with Andrew Lloyd Weber.  Sadly a few people in my screening fell asleep but those of us who stayed awake were treated to a very different way to tell a story.

If you’re a fan of the musical, or a member of the cast, then by all means go see “CATS.”  If you’re not a fan of musical theatre, go stand in line and see “Star Wars” again.