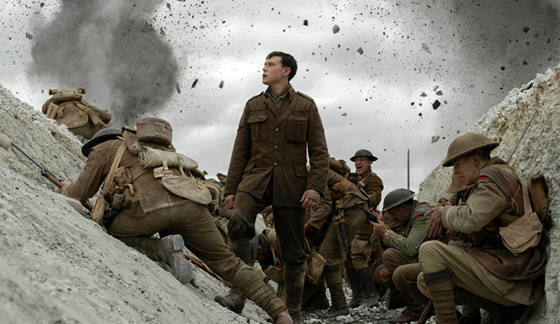 With three Golden Globe nominations, “1917” is not only a masterful example of the war film genre, but it is also a masterpiece of cinema in general. Directed by Oscar-winning British filmmaker Sam Mendes (“Skyfall,” “The Road to Perdition”), who also co-wrote the screenplay with Krysty Wilson-Cairns (“Penny Dreadful”), “1917” is a highly accurate depiction of the Great War with a plot that is essentially Great Britain’s “Saving Private Ryan.”

The story takes place during Operation Alberich, a strategic German military withdrawal lasting from February 9 to March 20, 1917 in France. Its purpose was to shorten German lines along a section of the Western Front in order to consolidate forces along the Hindenburg Line. “1917” plays upon this event by thrusting two young men into what appears to be an impossible mission.

British Lance Corporals Blake (Dean-Charles Chapman, “The King,” “Game of Thrones”) and Schofield (George MacKay, “Where Hands Touch,” “Captain Fantastic”) are suddenly pulled away from their unit on orders from their overall commander, General Erinmore (Colin Firth). The general needs a message dispatched deep into German territory to stop the advance of a Colonel MacKenzie (Benedict Cumberbatch), who believes he is pursuing a defeated enemy when in fact it is a trap that will cost the lives of 1,600 men including Lance Corporal Blake’s brother.

Lance Corporal Schofield is the more seasoned veteran of the two and is wary of crossing No Man’s Land as he believes they are the ones who are walking into a trap. However, Lance Corporal Blake is doggedly determined go through with the mission, which must be completed by the next morning when the fateful offensive by Colonel MacKenzie is planned. In their way lies a myriad of obstacles including endless amounts of mud, deep craters, barbed wire, booby traps and German snipers. It is a heart-pounding, near-continuous sequence of events that will leave you riveted to the silver screen.

Historically, “1917” delivers the goods with its accurate depiction of trench warfare ranging from the uniforms worn to the hellish conditions to the psychological effects on the soldiers. Painstaking care was clearly made to get every battlefield detail right as well as an accurate depiction of the Germans’ scorched earth policy as they pulled back to the Hindenburg Line. “1917” also delves into the toll the German occupation had on the French civilian population, best embodied by a young woman barely surviving in a burned-out city.

Chapman and MacKay deliver solid performances throughout the film as they humanize their characters, thereby making it easy for us to become emotionally invested in their epic journey. The biggest praise, though, is reserved for Mendes direction. For example, the first half of the nearly two-hour film, which does not feel that long, is shot so seamlessly that it has all the appearance of being one, long continuous take. His orchestration of mass chaos with a multitude of extras and cameras, not to mention how his hand-held work puts us right in the trenches, is worthy of an Oscar for best cinematography. “1917” is nothing less than one of the ten best movies of 2019.