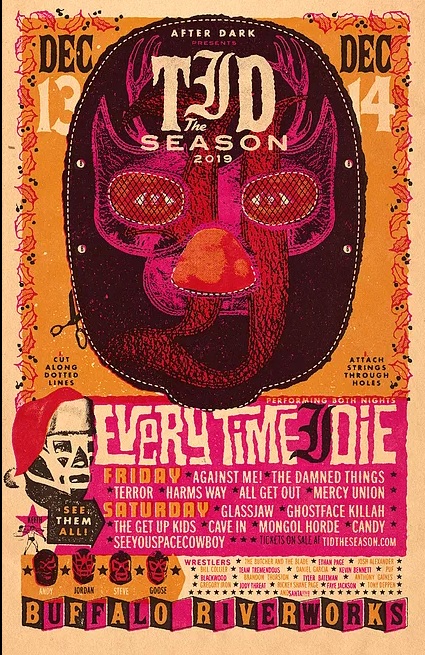 Every Time I Die, Against Me, The Damned Things, Terror, Harms Way, All Get Out, Mercy Union

Buffalo’s favorite sons Every Time I Die kicked off their two day “Tid The Season” event on December 13th at the expansive Riverworks complex in Buffalo, NY. The annual event which this year was spread across two days features tons of great music, ice skating, curling, a bucking reindeer and on day two a full card of Pro Wrestling. With both nights of the event being sold out well in advance the venue quickly became packed with fans from all points of globe who were anxious to see what the ETID boys had in-store as a thank you to their rabid fan base.

With Riverworks now in its 3rd year of hosting the annual Christmas show the venue and crew operate a tight ship as the night’s first group Mercy Union started promptly at 5pm. The New Jersey based group performed a brief upbeat set which helped warm fans up as they patiently made their way in from the cold and on to the venues large corridor and balcony. Leaving little time for the energy to wane indie rockers All Get Out would perform next. The group wasted little time getting acquainted with the growing crowd as they blasted through songs from their “Northport Sessions” release which the audience seemed to enjoy. Harms Way would follow taking the evening into a much heavy direction as vocalist James Pligge and company laid down a thunderous dirge of homegrown Chicago hardcore which almost instantly whipped the crowd into a circular frenzy for nearly the entire set. Hardcore veterans Terror would take the stage next serving as the explosive catalyst that the capacity crowd had anxiously been waiting for. Helmed by Buffalo native Scott Vogel the band easily put down one of, if not the best performance of the night. As the band blasted through songs from their seven album catalog, countless bodies made their way over the heavily manned security gate seemingly fueling the bands ferocity. Later on in the set Vogel stoked the coals even further buy demanding the crowd put the security to work which in turn caused even more bodies to fly towards the stage nearly decimating the yellow shirt clad staff.

The collective group known as The Damn Things followed for what would be the groups second ever Buffalo performance. Consisting of Anthrax’s Scott Ian, Alkaline Trio’s Dan Andriano, Fall Out Boy’s Joe Trohman and Andy Hurley and fronted by Every Time I Die vocalist Keith Buckley the group put on a really impressive set for a group who doesn’t play together all that often. Songs like “Cells”, “Omen” and “We’ve Got a Situation Here” sounded great and showcased each of the member’s musicality outside of their natural habitats. Filling the slot normally labeled as “Direct Support” was the punk rock group Against Me! which on paper may have had some scratching their heads given the aggressive sound of the other bands on the bill however the staple four piece group quickly alleviated any doubts people had as they performed songs like “I Was A Teenage Anarchist”, “Dead Friend” and “Cliché Guevara” before closing out the sixty minute set with the song “Black Me Out” from the groups 2014 album “Transgender Dysphoria Blues”.

Closing out the night were event hosts Every Time I Die. As the group came to the stage cloaked behind a giant curtain where a fire place was being projected while Christmas music blared over the PA you could feel the anticipation come to a boiling point. As the curtain dropped and several air cannons and sparklers erupted the moment everyone was waiting for had finally arrived. The band opened the set their song “Floater” before bridging into the songs “Pelican” and “Glitches”. Guitarist Jordan Buckley and Andy Williams along with bassist Steve Micciche dominated the stage from all angles while drummer Clayton “Goose” Holyoak and vocalist Keith Buckley handle business from their prospective perch’s. The band who has been touring off and on this year in between writing for a new record sounded great as always and in between numbers thanks fans for their continued support over the years. To further show their support the band treated the crowd to a new song they have been working on titled “Back Distance”. Like much of the bands previous work fans quickly showed their acceptance and appreciation for the song as they kicked, swung and flailed throughout signaling their approval.

Having attended this event for the last few years I always wonder how ETID will top the previous years show. With 2019’s show being split over two days I wasn’t sure how things were going to play out or if the band was going to really give their all on the first night knowing how big of a day Saturday generally is. Not only did ETID and the rest of the bands on the bill all turn in solid performance they all seemed to give just a little extra due to the magnitude and energy of the crowd. Yes it would have been great to see some killer pro wrestling on both days of the bill but there has to be room to grow. Given the successful sell out of both days and ETID’s uncanny ability to one up themselves time after time my hope is that they continue to build on making a really fun, fan friendly event for us die hard ETID-iots.

2.) Pelican of the Desert