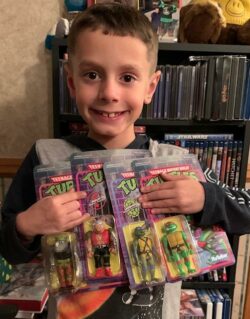 Within the past few years the toy makers at Super 7 have brought to market some really cool products which have helped establish the brand as one of today’s top retro toy companies. Their 3.75” ReAction Figures especially has been a continued growing line for the San Diego, CA based company and now includes over a dozen licenses including “Aliens”, “Universal Monsters” and “Teenage Mutant Ninja Turtles”. Our in house toy tester Ian had the chance to check out the first four figures from the “TMNT” line (Raphael, Leonardo, Bebop and Rocksteady) and put them through the paces to see just how well they could handle the rigorous play of an active 7 year old.

Prior to turning them over to Ian I had the chance to check out the really nice artwork that adorns each package. The artwork is all new however it stays true to the original Kenner blister packaging of the early/mid 1980’s. On the back you get a witty bio of each figure along with a picture of the full line in that series. I should point out that these figures do have a 14 and up label on them as they are intended more as an adult collectible. That’s not to say someone younger can’t play with them but the figures do include small pieces some of which are quite pointy and sharp.

Each of the figures looked just as good out of the packaging as they do in it as Super 7 did a great really nailing the details despite the figures smaller size. The four figures all feature 5 points of articulation and come with between 2 and three accessories which can be placed in the hands of each figure. Though Ian is a huge turtle’s fan he seemed to have more interest in Bebop and Rocksteady partially because of their off the wall look and “cool weapons” as he put it. Raphael and Leonardo still got plenty of play but in our house it is hard to compete with a punk rock warthog and rhino.

With the Holidays quickly approaching we highly recommend checking out the Super 7 “Teenage Mutant Ninja Turtle” Reaction figures. All four figures we checked out are available now and in the coming months more figures including Donatello, Michelangelo and Shredder are set to become available so help that collector on your list expand his or her collection this season with the latest offerings from Super 7.