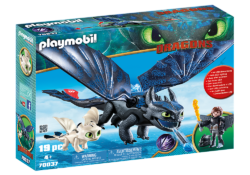 Just in time for the holiday season Playmobil has added several new figures to their “Dragons” line which is based on characters from the film “How To Train Your Dragon 3”. Children and Adults of all ages can now act out all of their favorite scenes from the movie and beyond with the help of newly added characters like “Light Fury”, “Hiccup” and “Deathgripper”. These highly detailed and fully articulate figures are sure to provide fun and enjoyment time and time again and feature solid construction which will hold up for years to come.

Having recently seen some of the “Dragons” toys at this year’s New York Comic Con our in house toy tester Ian was very anxious to get his hands on some of these really great looking figures. From a parents stand point I was pleasantly surprised by the easy to open packaging and minimal assembly that both of these sets required. The last thing any parent wants is an overzealous youngster repeatedly asking if they are done putting a toy together while also trying to manage multiple bags of pieces and highly detailed instructions. Aside from having to use a little extra muscle to get both Light Fury and Hiccup’s wings in place that’s really all there was to it with these sets. Hiccup does require a screwdriver for battery installation for the light up back fin. Aside from that no other tools are needed and you can get your youngster playing fairly quick. Ian really enjoyed the details of each of the dragons which include textured skin on both main figures (Hiccup/Light Fury) and some really cool and intricate paint work. This was a feature I also thought was very well done especially on the Light Fury and Toothless figures which are painted with an iridescent paint that gives off a shiny yellow glow when the light hits it.

Each set along with the main larger dragon comes with a handful of smaller toys as well. The Light Fury set includes a Baby Dragon and two children figures while the Hiccup set includes Toothless as well as its own Baby Dragon figure. Both larger dragon figures feature projectile shooting action which Ian also enjoyed (what kid doesn’t love shooting things at their sibling or parent). Thankfully Playmobil opted for less powerful springs as the smaller sized projectiles can quickly become lost if they went shooting too far. On that note parents of smaller children may want to take caution as most of the accessories are quite small and Playmobil does a solid job making buyers aware of this and with their recommendation of these being for ages 4 and up.

From price point to play Playmobil continues to do a solid job and their latest additions to the “Dragons” line are no different. Even after a couple of weeks of hard play each of the figures still look new and are working as they should. Yes some of the tiny pieces caused a bit of frustration when they inevitably went missing but, it only caused a momentary pause in the play and thankfully did not hurt any of the functions so If you have a youngster on your list this holiday season we definitely recommend checking out Playmobil’s “Dragons” line as they are sure to put a smile on that loved ones face Christmas morning.