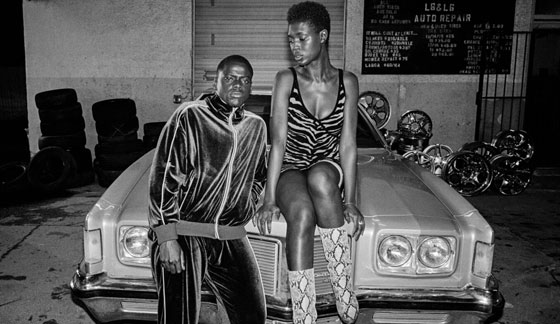 Ideally, a great work of art will have a deeply emotional and even an intellectual impact on the viewer. It is no different with the genre of cinema. A rare, special example of such a work is the new drama “Queen & Slim.” Erroneously labeled by some as a Bonnie and Clyde-type story, “Queen & Slim” brilliantly explores the fear and outrage felt by many in America over numerous fatal shootings in recent years of black men, often young ones, by white law enforcement officers. While its climax is heavy-handed and the overall portrayal of the police is insultingly generalized, “Queen & Slim” remains a terrific specimen of cinematic art.

The story begins innocently enough in a black-owned restaurant where Ernest “Slim” Hines (Daniel Kaluuya, “Get Out,” “Black Panther”) and Angela “Queen” Johnson (Jodie Turner-Smith, “Jett”) are having their first date. Ernest seems almost outclassed by Angela, an experienced attorney who only said yes to him because she was lonelier than normal on this night in Ohio. During the drive back to her place, a white police officer pulls them over because Ernest forgot to use a turn signal on a deserted street. The situation escalates when the officer forces Ernest out of the car and pulls his gun despite the latter’s cooperation. A struggle ensues, resulting in Ernest fatally shooting the officer in self-defense, all of which is caught on the officer’s dashcam.

Considering her knowledge of the law, Angela inexplicably and fatefully convinces Ernest that they should flee the scene. Thus, begins an arduous journey to the Deep South while trying to avoid a nationwide manhunt that produces a large bounty for their heads. They eventually make it to Louisiana where Angela’s Uncle Earl (Bokeem Woodbine, “Spider-Man: Homecoming”), a pimp suffering from PTSD because of his war service, reluctantly helps aid their quest to get to Florida. Once there, their plan is reach Cuba. This is also when the duo realizes how much of a media sensation they have become across the country and how they have become a symbol to those tired of racial injustice. This is touched upon in one powerful scene, but in the film’s totality it is a paltry effort to explore an important aspect of the story by first-time, feature-length director Melina Matsoukas, who is best known for her music videos, short films and the HBO series “Insecure.”

Kaluuya and Turner-Smith are magical on the silver screen together. Their chemistry is smooth as silk and their powerful, emotional performances, brimming with fear, anger, love and bravery, are worthy of Oscar consideration. Woodbine delivers the best acting of his long career with a brief, yet complicated portrayal of a man swimming in pain beneath the surface of his tough exterior. He, too, should be considered for a nomination come Academy Award time.

It is a misnomer to compare Ernest and Angela to Bonnie and Clyde, who seem to still be mistakenly labeled as some sort of folk heroes like the James brothers. Here is a refresher from a trained historian – Bonnie Parker (1910-34) and Clyde Barrow (1909-34) are credited with murdering at least four civilians and nine law enforcement officers as well as numerous armed robberies and kidnappings. They were not Robin Hood-type characters and bare no resemblance to Ernest and Angela, who go out of their way to not harm anyone during their attempt to get out of the country before being potentially gunned down.

Overall, “Queen & Slim” is a thought-provoking story that is relevant to our times and is so emotionally powerful that it will stick with you long after you have left the theater.