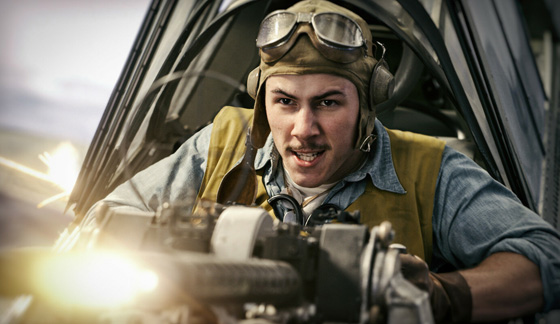 I haven’t seen the 1976 war epic, “Midway,” but unfortunately I’ve seen the 2019 “Midway.” Even though I haven’t seen the 70’s dramatization, I’m sure it’s still better than Roland Emmerich’s bombastic vision. Whereas the Jack Smight film had star power like Charleton Heston and Henry Fonda, Emmerich decided to see which one of the Jonas Brothers was available, what unheard of actor Ed Skrein was up to, and if Woody Harrelson could do some work for pennies on the dollar.

“Midway” is about one of the most pivotal battles in the Pacific Theater during WWII. This update begins with the surprise attack on Pearl Harbor by the Japanese, before it slowly transitions to the formulation of the Battle of Midway. The nitty gritty of this film, the abundance of characters, is at the core. Going over all the characters in this movie would be pointless, since the majority, while being real-life heroes, are forgettable. That’s because their heroics are delivered by wooden actors or are shifted into place in front of the camera so they can deliver some cliché dialogue and unnecessary exposition. This is the kind of movie that’ll make you appreciate “Dunkirk” if you weren’t a fan of that movie.

The big question though, for people interested in watching this film, is whether or not it pays tribute to the brave men and women who fought in the Second World War. Kind of, minus the brave women part. The only time we see women, they’re bothering their brave significant others or saying “I’ll go powder my nose,” as a euphemism for crying over the potential loss of their husband. “Midway” is the kind of movie you could compare to Michael Bay’s “Pearl Harbor” because of the way they both handled their subject material. It reaches a few gimmicky crescendos, plucking at the American heart strings, but not enough to be sappy, but slightly enough to honor the real heroes during this battle, especially towards the end. Throughout we’re introduced to characters that don’t matter or whose deaths should mean something, but it’s handled so haphazardly that you’re more likely to question who died, rather than mourn their loss.

I think my biggest complaint with this movie is how pandering it is to Chinese audiences. There’s been a lot of talk in the mainstream lately about China’s influence in sports and pop culture. The biggest finger pointing has been towards the NBA and Disney, who can’t be blamed for obeying the almighty dollar, who has commanded them to submit to Xi Jinping. “Midway,” Emmerich, and Lionsgate seemed to have committed the ultimate sin in this regard. Their intent ultimately feels disingenuous because they’ve decided to tell a tale about American perseverance, while bending the knee to their Chinese financiers. I think theatergoers expecting nothing, or unaware of China’s influence on Hollywood, will be pleasantly surprised by “Midway,” and may even have a positive reaction. I feel like most people will have the same problems I had with it. “Midway” has so many ethical and moral problems, that ultimately, any good intentions are torpedoed.