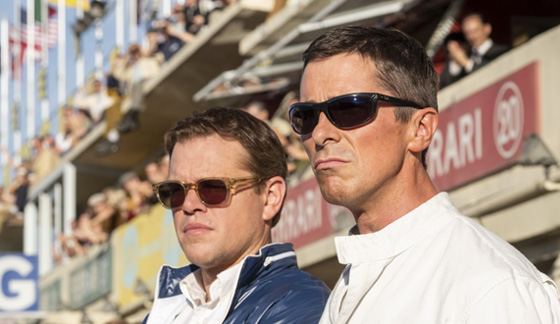 There have only been a handful of movies dealing with auto racing that give the audience the feel of being behind the wheel.  In the 1960s, as the sport was gaining notoriety, films like “Winning,” “Le Mans” and “Grand Prix” fueled the audiences’ appetites.  Later on, “Days of Thunder” and Ron Howard’s “Rush” helped convey the feeling of going around in a circle at 200 miles per hour.  This week, that list is joined by the latest film from director James Mangold, “Ford v Ferrari.”

In 1959, Carroll Shelby (Damon) did what no American had ever accomplished by winning the 24 hour Le Mans auto race, held annually in France.  Shortly after his victory Shelby left the driving to others and began selling sports cars to the rich.  But he wanted more. And one day, that “more” – in the form of Ford Motor Company’s Lee Iacoca (Bernthal) – walks into his showroom with an offer he can’t refuse.

With an exhilarating pace that belies its 2 ½ hour run time, “Ford v Ferrari” is a testament to the wills and friendships of two very different people.  While Shelby know cars he also knows who needs to be driving them.  That would be one Ken Miles (Bale, actually getting the chance to employ his very real British accent), a top driver who has a bit of a temper.  It’s this temper that his held Ken back and he knows he needs to become a “team player” if he wants to race the new car that Shelby has created.  Miles has a loving wife and a doting son, both of who support him in the good times and bad.  If Ford hopes to beat perennial champion motor company Ferrari at the upcoming Le Mans race, the good times need to outweigh all other.

I’ve always been a fan of James Mangold.  From the cop drama “Copland” to the R-rated Wolverine epic “Logan,” he has always entertained me with smart films that show a master’s touch in storytelling.  Here that touch is put together with two of the best actors working today, making for a nice combination.  Throw in plenty of race footage and you’ve got a film that takes the checkered flag.