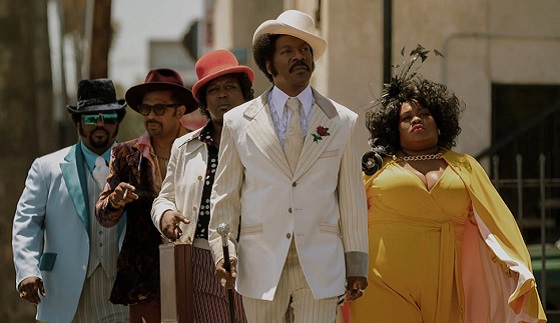 If.  If pigs had wings, they would fly.  If a frog had wings it wouldn’t bump its ass.  And if Eddie Murphy made better career choices he’d already have an Oscar.  He may have that opportunity soon thanks to his performance as Rudy Ray Moore in “Dolemite is My Name.”

Rudy is a hustler with big dreams.  He left his Fort Smith, Arkansas home and headed for California, knowing he would be a star someday.  When we meet him, that day hasn’t yet happened.  It’s the 1970s and Rudy manages a record shop while MC-ing at the local jazz joint, telling stale jokes and trying to get discovered.  Things begin to improve when he overhears a homeless man telling outrageous stories about a character named Dolemite.  He pays the man to share his tales and, donning an afro wig and sporting a look that could only be described as “pimp-sheik,” he takes the stage and begins telling the old man’s stories in a fresh new way.  A lot of jive and “F” bombs.  Suddenly he’s a hit!  A few successful comedy albums later Rudy decides to take his character to the big screen.  And the story begins.

Featuring an amazing cast, led by Eddie Murphy, “Dolemite is My Name” is an intriguing look behind the scenes of one of the most influential genres in film, the Blaxploitation film.  This genre spawned movies like “Shaft,” “Black Caesar,” “Blackula” and so many more.  It is also a look at true guerilla filmmaking.  Rudy knows nothing about making movies, yet he’s not intimidated at the prospect either.  He can’t be.  He knows what his goal is and he’s determined to reach it.  He is assisted on screen by some well known actors including Mike Epps, Keegan-Michael Key and, in one of his best performances in many years, Wesley Snipes, who stars as real-life actor D’Urville Martin, whose friendship with Fred Williamson led to some great roles in many of “the Hammer’s” action films.  Martin thinks of himself as more than a Blaxploitation star, commenting that he’s worked with Roman Polanski (he’s the Dakota’s elevator operator in “Rosemary’s Baby.”  And, for some extra trivia, he was cast as Lionel Jefferson in the two pilots for “All in the Family,” though lost the role to Mike Evans when the series finally aired.)  Martin feels he’s above a low-budget film like “Dolemite” until Rudy offers him the chance to direct.  NOW he’s an auteur!

The script is sharp and funny, which I’ve come to expect from writers Scott Alexander and Larry Karaszewski, who have given us such great bio-pics as “Ed Wood,” “The People vs Larry Flynt,” “Man on the Moon” and “Big Eyes.”  Director Brewer (“Hustle and Flow,” the upcoming “Coming to America 2” keeps the film moving smoothly, letting the humor build while still telling an interesting story.

Eddie Murphy should have been an Academy Award nominee for the first “Nutty Professor” film, and he should have won the award outright when he was nominated for his performance as Jimmy Early in “Dreamgirls.”  As long as he doesn’t have “Norbit 2” on the horizon, he may finally take him the prize.