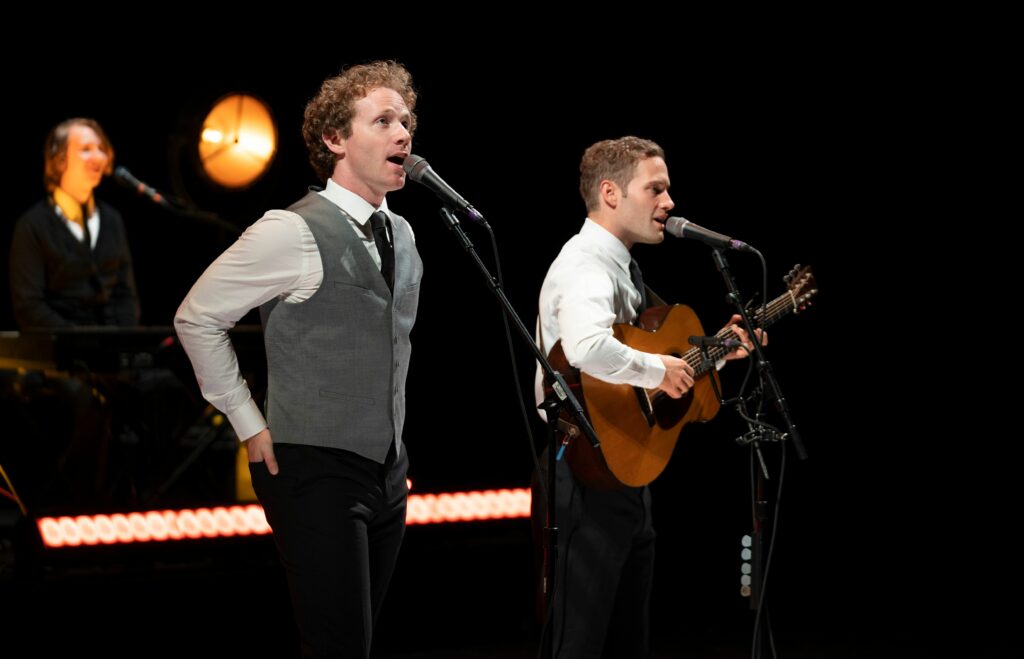 As the show opens we meet Paul Simon (George Clements) and Art Garfunkle (Andrew Wade), two school chums who enjoy singing together. They open the show with “The Sound of Silence,” the first of their many successful hit singles. Paul and Artie take turns telling their story, going back to when they recorded the song “Hey, Schoolgirl” under the name Tom and Jerry (a bit of trivia I already knew). As the stories are told, they are highlighted with a video display of the various time and era being recalled.

Both actors were outstanding. Mr. Clements was not only in great voice, pretty much nailing Simon’s sound, he also showed himself to be an excellent guitar player. Mr. Wade appears to be channeling Art Garfunkle, seemingly being able to mimic his stances and cadence with ease. He also has the unenviable task of trying to pay tribute to one of the greatest voices in music history, a task he undertakes, and completes, perfectly.

The first act concentrates on their earlier music (“I Am a Rock,” “Homeward Bound”) while the second act take the audience through their greatest period, from “The Graduate” to the end. While it was great hearing all of the songs featured (both hits and album cuts), the highlight for me was when Mr. Wade brought the house down with an amazing rendition of one of the greatest songs ever written, “Bridge Over Troubled Water.” The two stars are backed up by an amazing group of musicians who each contribute a highlight or two to the show.

I’ve been lucky enough to have caught Paul Simon in concert a few times. Sadly, I never got to see him live with Art Garfunkle. Until tonight.

“The Simon & Garfunkle Story” is currently on tour. For information on where you can catch it, click HERE.

SET LIST: The Sound of Silence, He Was My Brother, Hey, Schoolgirl, Bleecker Street, Kathy’s Song, I Am a Rock, Richard Cory,, Somewhere They Can’t Find Me, The Big Bright Green Pleasure Machine, Patterns, For Emily, Whenever I May Find Her, Homeward Bound, Scarborough Fair, The 59th Street Bridge Song (Feelin Groovy), Mrs. Robinson, A Hazy Shade of Winter, Voices of Old People, Old Friends, Punky’s Dilemma, America, Fakin’ It, Cecilia, Keep the Customer Satisfied, The Only Living Boy in New York, 50 Ways to Leave Your Lover/You Can Call Me Al/Me and Julio Down by the Schoolyard, Late in the Evening, Baby Driver, Bye, Bye Love. ENCORE: Bridge Over Troubled Water, The Boxer.