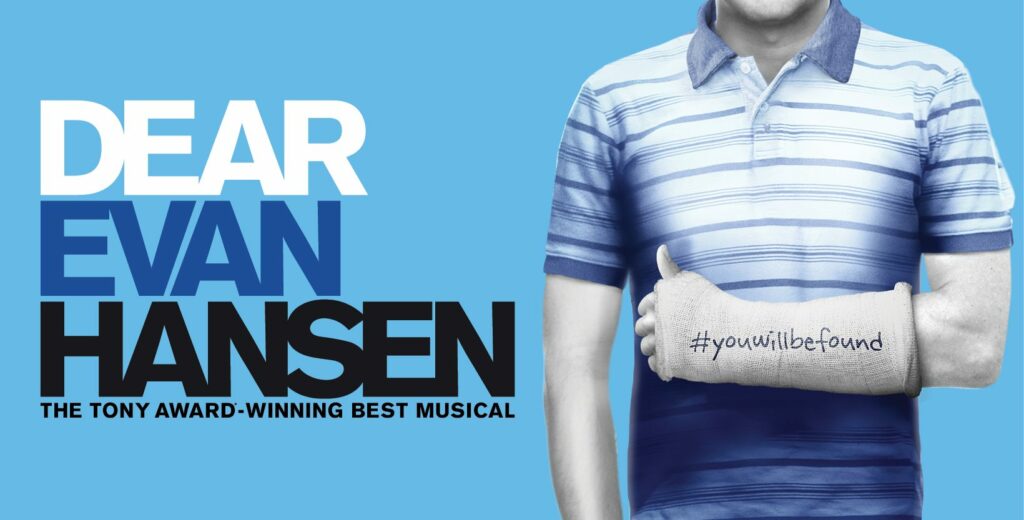 Evan Hansen (an AMAZING Stephen Christopher Anthony) is a young man about to start his senior year in high school. We meet him sitting in his room, his arm in a cast from a tree-climbing accident, working on a letter…to himself. Evan has had some issues in his life and part of his therapy is to write himself a positive letter each day. But he’s not feeling positive. Evan is shy and quiet and friendless. He lives with his hard working mother – when she’s not working she attends classes to be a paralegal – and feels all alone in the world. He writes his letter, but it’s not positive. And when it’s finally read, it changes Evan’s life in ways he never intended.

Winner of 6 Tony Awards, including Best Musical, “Dear Evan Hansen” is a show that will make you examine your life and the choices you made in it. Taking place on an almost bare stage with an abundance of video screens, “Dear Evan Hansen” shows the impact a simple misunderstanding can make in a world dominated by social media.

The cast is superb. Mr. Anthony repeatedly brought the audience to tears with his portrayal of a boy who wants desperately to be loved and accepted. The supporting cast is equally strong. As Evan’s mother, Jessica E. Sherman portrays a woman who only wants the best for her son but can’t find the way to tell him. Her love is obvious to everyone but Evan and you can feel the pain she feels by not being able to communicate with Evan. Take away the music and this show would have won a Tony for Best Play.

But the music is there and it is amazing. With so many Broadway shows using either popular tunes or adapting from films, it’s a treat to see an original show with an original idea. If you want to see Broadway at it’s best, you can’t go wrong with dropping “Dear Evan Hansen” a line!

“Dear Evan Hansen” runs in Kansas City through October 20th. For information on the show and other upcoming tour dates, click HERE.