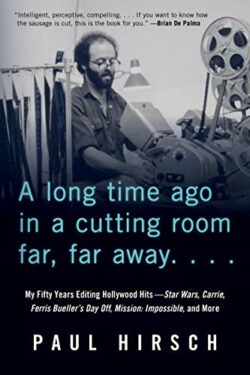 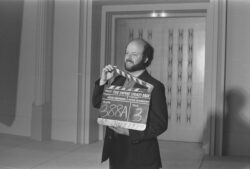 Oscar winning film editor Paul Hirsch has been fortunate in that he has worked numerous times with two of Hollywood’s best known filmmakers, Brian DePalma and John Hughes.  He also won an Academy Award for his work (along with Marcia Lucas and Richard Chew) on one of the most popular films of all time, “Star Wars.”  With a book highlighting his career about to be released, Mr. Hirsch took the time to answer some questions about his lengthy career.

MIKE SMITH:  What drew you to become a film editor?

PAUL HIRSCH:  A number of things.  I was fascinated when I first saw a Moviola.  I was blown away by a festival of Orson Welles films.  I liked working with my hands, and was drawn to the tools.  I loved movies.

MS:  Other film editors I’ve interviewed had mentors they admired.  I recently spoke with Arthur Schmidt and he told me that he learned under Dede Allen and Neil Travis.  Did you have someone whose work you admired and/or who took you under their wing?

PH:  Brian DePalma was my mentor.  He encouraged me, empowered me, validated my work and deeply influenced me.  I was cutting his films from the age of 23, and so never worked under a professional feature film editor.  I learned by doing and studying how films I admired were cut.  I was sort of like the art students you see in museums, copying the masters.

MS:   How did you come to edit “Hi Mom” for Brian DePalma?

I had cut the trailer for “Greetings,” thanks to my brother.  When they got the money to do a sequel, titled “Son of Greetings,” Brian hired me to cut it.

MS:   Five or your first six films were with DePalma.  He is well known – and often criticized – for his use of split-screen (the prom from “Carrie” being a great example).  Was that something you discussed in the editing room or was that his original vision?

PH:  Split screen is Brian’s thing.  I can’t take credit for it, but I do love and appreciate the tension that can result from juxtaposing images on the screen, even if, or rather, especially if, the screen isn’t actually split.  I’m referring to deep focus shots, which have become a lost art, where you have a near object on one side, and a distant one on the other.  Brian did that a lot, using split diopters, with tremendous success.

MS:   A lot of the young filmmakers in the 70s (DePalma, Spielberg, Scorsese, Lucas) were very close with each other.  Is that how you were hired for “Star Wars?”

PH:  Yes.  Brian screened the final cut of “Carrie” for George and Marcia Lucas on their return from principal photography on”Star Wars” in England.  They needed help, and turned to me.

MS:  How difficult was it editing a film where you sometimes had to wait months for a finished special effects shot?

PH:  We had ways around that.  We would cut in place-holders or a piece of leader that we estimated was the right length.

MS:  You, along with Marcia Lucas and Richard Chew, received the Academy Award for your work on “Star Wars.”  Where do you keep your Oscar?

PH:  It’s on a bookshelf in my office.

MS:  You’ve done eleven films with DePalma but, surprisingly, not ‘The Untouchables.”  Was there a reason you didn’t cut that picture?

PH: I moved to the West Coast after “Blow Out.”  I didn’t cut a picture for Brian in the ensuing ten years.  We next worked together on “Raising Cain,” when he was living in California.

MS:  You also worked a lot with John Hughes.  How was he to work with and were there any major differences in the way he and DePalma approached a film?

PH:  John was a lot of fun to work with until he wasn’t.  He was a brilliant artist, but had mercurial moods.  But I had a great time working with him.  John was a writer, primarily, and his medium was words, by and large. Brian is a great visualist.  His ideas are primarily graphic, both in terms of camera movement, which no one does better, and in terms of visual story-telling, that is to say, how scenes can be constructed in the editing room.

MS:   Hal Ashby was a great film editor who went on to become a fine director.  Have you ever wanted to direct?

PH:  I did want to for a while, and then the fever broke.  I like working all the time, and editing afforded me that.  To me, directing was like perpetually running for office.  I’m more of an introvert, and editing suits me just fine.

MS:   Your most recent film was the Tom Cruise version of “The Mummy.”  What is the biggest difference between cutting a film now and forty-plus years ago?

PH:  There’s a lot more reliance on vfx now, which consumes a lot of time and energy.  And when I started out, directors were given much more discretion.  The director was the key creative figure in the package, often with final cut.  That happens less these days.  If a director had a hit back then, the studio would ask, “What do you want to do next?”  Today, the projects are developed by the studio, and the director is “cast” the same way you would choose an actor for a role.  Producers and studio executives are much more involved in the editing process these days.

MS:  What can you tell us about your new book?

PH:  It’s an account of my adventures in Movie-land, my experiences of the last fifty years and what I learned during that time.  I write about the various projects I worked on, and the fascinating people I encountered.  I share some of the insights I picked up along the way as I made my way into the industry.  It’s not a how-to book, which I consider boring.  And it’s not a gossipy tell-all where I get revenge on the jerks I met along the way, which really weren’t that many when I think about it.  The people I got along with are much more interesting.  I meant it to be entertaining above all.  I hope people will read it for pleasure. I’ve had a number of friends read it.  Editors in particular seem to like it, but I think anyone who is curious about what goes on behind the scenes in our business will find it fun to read.

MS:  Are you working on anything new?

PH:  I’ve been working on the book for many years, first writing it, and then editing it.  I only just recently finished going over the page proofs.  I’m going to take my time now, reading scripts, and will see if anything pings my interest.  I’m sure it’s only a matter of time.