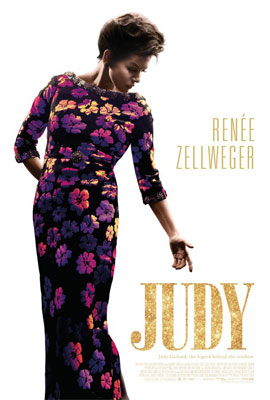 When you mention the name Judy Garland to most people, their first thought is usually of Dorothy Gale, the Kansas farm girl who traveled the Yellow Brick Road in “The Wizard of Oz.”  They may not know that she was a singular talent with an amazing singing voice, or that she was also a fine actress, earning two Academy Award nominations and criminally losing Best Actress for “A Star is Born” to Grace Kelly.  They may remember her as Liza Minelli’s mother.  But very few will know that she led a troubled life.  Multiple marriages.  Being fired from films (she was originally scheduled to star in “Annie Get Your Gun” but was replaced by Betty Hutton).  Alcohol and drugs.  It all contributed to her death at the very young age of 47.  There will never be another Judy Garland.  But I must say, Renee Zellwegger in the new film “Judy” comes awfully close.

The film highlights two periods of Garland’s life.  As a child actress (Darci Shaw), presumably during the filming of “The Wizard of Oz” and towards the end of her life when she undertook a tour of London.  Both are harrowing.  Despite all of the smiles and staged fun, Garland is treated like an indentured servant by everyone from MGM head L.B. Mayer to the studio hack hired to make sure she doesn’t take a bite of a hamburger during a photo shoot for fear she’ll gain weight.  In London, Garland (Zellwegger) must deal with her personal issues, which include showing up on stage intoxicated.  Things begin to get better when she meets Mickey Deens (Wittrock) at a party.  Though he is much younger then she is, the two begin a relationship which seems to life Judy up.  But can she remain on top?

I always go into films like this with a little trepidation.  It is rare when you find an actor or actress that is able to embody a character you are so familiar with.  Jamie Foxx (“Ray”) and Rami Malek (“Bohemian Rhapsody”) pulled it off and were rewarded with Oscars.  Zellwegger may join them next year.  Hers is not a caricature of Garland but an actual channeling.  Her appearance…her mannerisms…everything says “Judy Garland” on film.  And, while she doesn’t sound like Garland when she does (and to be honest, no one can) she pays homage to some of the great tunes Garland was famous for.  In between concert scenes, which are well presented, the little looks into the life of this legend keep the film grounded, solidly anchored by Zellwegger’s award-worthy performance.

“The Wizard of Oz” is regarded as a classic.  So was Judy Garland.  50 years after her death, and 80 years after the film debuted, it’s good to see her getting her due.

One Reply to “Film Review: “Judy””