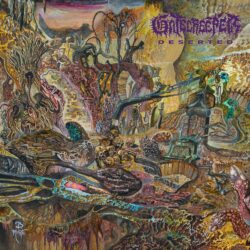 It’s October and what better time of year to unleash a crusty death metal album upon the world? After three long years and numerous splits and EPs later, Arizona death metal band Gatecreeper return with possibly the best death metal album of 2019. Deserted, released October 4th on Relapse Records is a shear force of nature. Upon listening, the album summons desert twisters of sand and sidewinders it’s so heavy.

There should be no worry of a sophomore slump here. These guys take their art seriously and have only honed in on what makes them so great. The musicianship and songwriting has elevated to new heights on this album. Every riff soaked song is seeping with what you love about Gatecreeper, with some new elements thrown in. Songs like “Puncture Wounds” will be a welcomed breath of fresh air for those growing tired of the early-90’s era death metal revival. While tracks “Everlasting” and “Sweltering Madness” may be the best material the best has ever released. Three minutes into the former and any self-respecting metalhead is telling their friends to “shut-up and listen to this part.”

They stick to their guns on this one and stay true to the Gatecreeper formula. Yet they still manage to bring something new out of the coffin and continue to impress. All of the bands influences are on display here, granting some nostalgia to old school death metal fans. Chase Mason’s vocals are as low as ever, while his blood-curdling metal shrieks have really tightened up compared to earlier releases. Guitar riffoholics Jack Maniacky and Eric Wagner have improved their skills and completely plastered this album in thick, heavy riffs. While the rhythm section, bassist Sean Mears and drummer Matt Arrebollo, have impressively made every song on the album engaging and great for head-banging. Let’s not forget about the amazing as always Godcity mixing done by the legendary Kurt Ballou.

This album should be listened to at high volumes and while you’re punching someone in the face. It’s heavy, grimy, and sometimes slightly melodic and creepy. Everything you need in a death metal album. If you’re sleeping on this band you need to get to the nearest record store or on the internet and become the next biggest Gatecreeper fan. Death metal and the metal scene at large needs bands like this to keep putting out quality music and make us all proud to be fans of this often overlooked genre. Check out “Deserted” today and be sure to catch Gatecreeper on tour with Exhumed throughout the end of 2019