With the leaves beginning to change in the North East for most that signals that the fall season is underway. For fans of pop-culture it’s the tell tale sign that the annual New York Comic Con is on the horizon. With Connecticut based organizers Reed Pop at the helm the convention would once again descend on the Jacob K. Javits Center which is tightly nestled in the heart of New York City. Over the course of 4 days (10/3 thru 10/6) Fans of all ages packed the massive convention center in hopes of obtaining their favorite collectible and/or meeting some of the comic industries top creators. We took in day two of the event this year which boasted an impressive schedule of panels and releases that had us running back and forth, left and right and up and down the entire day.

Upon entry we quickly made our way to the collectible toy area which over the last few years has seem to double in size. Here we were able to 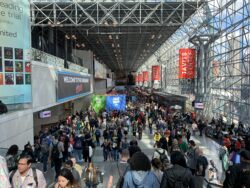 check out booths by makers such as Super 7, Entertainment Earth and of course Funko. All three of these companies offered plenty of exclusive items a majority of which were only available to those who were selected via a pre-show lottery. Amidst the snaking lines and impromptu cos-play photo shoots we were able to test out the latest offerings from Arcade 1Up which included the newly released ¾ versions of “Golden Tee” and “Teenage Mutant Ninja Turtles”. The company was also showcasing a nearly 10 foot tall fully functioning arcade cabinet that had attendees waiting in line all day just for a chance to work the oversized retro controls. From there we made our way past the Toy Tokyo booth which this year included several exclusive sculpts by artist Ron English and Joe Ledbetter. We also made a stop at the Playmobil booth where they were showcasing their upcoming “Scooby-Doo” and “Back To The Future” figures and play sets complete with the iconic Mystery Machine and time traveling DeLorean. From there we descended into the ground floor of the center which hosted a who’s who of comic creators including Greg Capullo, Jim Lee and John Romita Jr. to name just a few. Easily one of the busier corridors of the event comic collectors were elbow to elbow much of the day attempting to get books signed or purchase hand drawn art from their favorite artist. Neighboring the artist alley on both sides were the celebrity meet and greet area which on this day included appearances by Paul Rudd, Tom Hiddleston and Billy Dee Williams. Across the way in the opposite corridor was the massive panel room which played host to panels ranging from HBO’s “Watchman” series to TBS’s “Impractical Jokers” and probably the most exciting of the day TNT’s “All Elite Wrestling” which included an on-stage brawl between stars Chris Jericho and Cody Rhoades that had those in attendance going absolutely nuts!

As our day came to a close it was dizzying to think about all the things we had experienced in just a few hours. Despite finding several empty booths in a couple different locations (something we had not seen in years past) there certainly was no shortage of things to see or do at New York Comic Con 2019. Reed Pop and the other companies associated with this con continue to put on a solid show that’s offers something for everyone. I do feel the event promoters need to continue looking at how they layout the show in a continued effort to ensure attendees are able to move freely throughout the multiple floors and levels. This year’s map did feel less cluttered than in previous years however, there were still a number of high traffic areas which brought people to a standstill making it hard to move or take in the vendors/displays. Moving panels to various other locations around the city has surely helped ease some of the events growing pains as did the addition of the Cos-Play lounge but with attendance near to or exceeding the 200,000 accommodations need to continue to help ensure a safe and fun atmosphere for all those who attend.