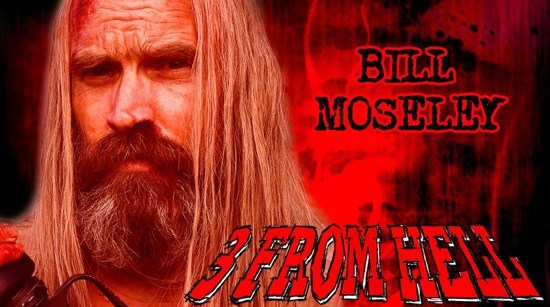 Bill Moseley is a legend in the horror business. He is known best for playing Chop Top from “The Texas Chainsaw Massacre 2” and also Otis in “House of 1000 Corpses” and “The Devil Rejects”. He is reprising the role of Otis in Rob Zombie’s latest film “3 From Hell”. Media Mikes had a chance to chat with Bill to discuss his new film and stepping back into the character.

**Tickets for the September 16th/17th/18th nationwide release of 3 FROM HELL are available at FathomEvents.com/3FromHell**

Mike Gencarelli: It’s been nearly 15 years since “The Devil’s Rejects”, what was it like picking up this character again after all these years?
Bill Moseley: It seemed liked it was going to be a pretty daunting task to try that but once we got to the set and got costumes and makeup – and with that good script under our wings – everything worked out pretty smoothly.

MG: Gotta respect the beard man, how long that take to grow out?
BM: That beard was at least 16 months. My wife was very excited when I finally got “beard release”. She followed me to the barbershop, here in Los Angeles, and they cut it all off and put it in a plastic bag.

MG: After working with Rob Zombie now on a few films; did you feel you had freedom with this character?
BM: Most of it was in the script. Sometimes with creative freedom to come up with new lines and moves for the character is because the scripts need a little help. But with Rob’s scripts they are so good you really don’t need to do more than follow the printed page.

MG: After the ending of “The Devil’s Rejects”, some would have thought that was the end but, I like things turned out in “3 From Hell”…
BM: With “3 From Hell”, I am glad the way Rob brought us back due to the poor shooting of the Rudgesville Sheriff Department. A lot of fans certainly wanted more after “The Devil’s Rejects”. I remember at different horror conventions fans coming up and giving scenarios. The worst was with someone waking up and saying “Wow, what a dream I had”, that is the lamest device in Hollywood. One that I thought was really cool is that we did actually die, went to hell and the devil rejected us making us truly the devil’s rejects…but of course then if you do that then we are supernatural and that’s a different universe. This way makes sense cause the sheriff’s department looked like a real motley crew even with us driving right at them.

MG: Where was the Mexico scenes shot?
BM: Right outside LA. It was a cool movie ranch. I think it was in the same vicinity as the spawn ranch scenes from “Once Upon a Time…in Hollywood”. I don’t think it was exact location but there are still movie ranches dived around the hills in LA.

MG: What was your biggest challenge working on this film?
BM: The biggest challenge was getting back into Otis’ skin after 14 years. Also to do Otis from “The Devil’s Rejects” justice and to take him to a new level and that is a big challenge. I was a little nervous at first, day 1/day 2 on the set, I had mini monologue to deliver and I remember flubbing the lines, so I took a time out after a couple of takes. I remember a voice in my head saying “Get out of the way Bill, I got this!” It was Otis and after that everything just went very smoothly.

MG: Would you consider this the end for Otis and the gang or could you see yourself stepping into this role again?
BM: I don’t necessarily see an end. I still have a kid in college, so I hope there will be three or four more of them. And BTW they are really fun to do. It is hard work making movies, there are a lot of moving parts and pressure but working with these guys makes it worth it.