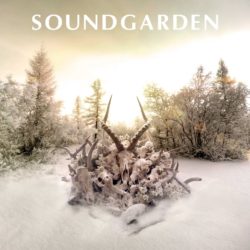 Soundgarden’s sixth and final album “King Animal” is the latest in a series in specially packaged re-releases from the platinum selling band which celebrates the groups 35 year career. Like the previous three releases from this series “King Animal” comes pressed on 180 gram colored vinyl and is packaged in full color, dual gate fold sleeves complete with album liner notes.

The final release from Soundgarden after the group’s reformation in 2010 “King Animal” picks up roughly where its predecessor “Down On The Upside” leaves off. Not it in theme but in stylistic approach as the album features a wide range of textures and sounds giving listeners a smorgasbord of musical ear candy to digest. The latest LP release comes pressed on double white/yellow marble 180 gram vinyl which gives the albums 13 tracks a balanced warmness as it plays through your speakers. Tracks like the rawkus “Non-State Actor” and the eerie “Bones of Birds” were personal highlights as were the fast paced “Attrition” and the fanatical thumping of “Eyelids Mouth”.

Being this is not the albums first vinyl treatment aside from the addition of 180 gram vinyl it doesn’t really offer anything that the previous release didn’t already provide. This seems to be a common occurrence with these anniversary releases as none of them have offered anything extra to help entice buyers to grab another copy. With the various bonus content that was made available previously from this release I think it would have been an ideal time to house it all under one nicely packed anniversary collection however, this was not the case. Don’t get me wrong re-releases can be a really cool thing and like the subsequent 3 the packaging is second to none however they really should have given fans a reason to purchase them and “King Animal” is no exception. If you have this release already you may want to skip this one however if you haven’t gotten yourself a copy and just want the core album with no fancy extras, Then grab this anniversary edition as you won’t be disappointed.

4.) A Thousand Days Before

5.) Blood on the Valley Floor