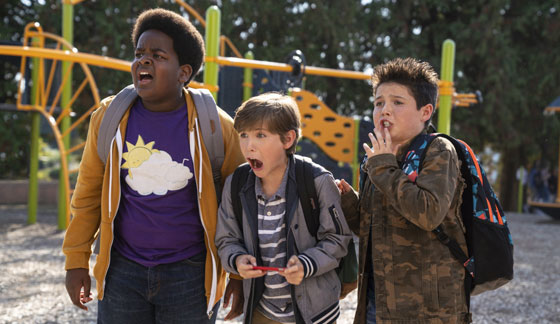 More than lately, it feels like we’ve been inundated with coming-of-age movies. Just off the top of my head, we’ve had “Lady Bird,” “Eighth Grade,” “Booksmart,” “Call Me By Your Name,” “Love, Simon,” “Blockers,” “Mid90s,” and to some extent, “IT.” Most of those movies are natural extensions of the genre which now include women, the LGBT community, Millennials and Generation Z. So “Good Boys” just feels like a casual dose of more of the same before the arrival of the 2010s.

To say that “Good Boys” has a story, feels a bit disingenuous to the film’s true narrative which feels more like several sketch ideas strung loosely together. To cut straight to the core of what’s happening; Max (Tremblay), Lucas (Williams) and Thor (Noon) have skipped school to fix several spin-off problems caused by Max’s invitation to a party where he and his pals will finally be able to kiss a girl. The problems this invitation have caused involve the destruction of a pricey drone, the theft of drugs, the need to buy drugs, and being chased all around their neighborhood by some angsty high schoolers. It’s nothing we haven’t seen before and several shenanigans feel reminiscent of “Superbad.”

This plot doesn’t really take shape from the get-go. “Good Boys” actually looks and feels amateurish for the first dozen or so minutes, coming off like a string of riffs on preteens being clueless preteens as they navigate a tricky minefield of sex talk, sex toys and dirty jokes. At least the movie is smart enough to recognize that most 12-year-olds talk a big game, but are as clueless as any kid entering a sex education class for the first time when it comes to the actual act of doing it. The inherent comedy of young kids saying four-letter words quickly loses its luster, but it’s the personalities of our three boys that the film actually finds some real comedy in.

Lucas is like Lincoln, he cannot tell a lie. His inability to fib further dooms the trio during their perilous journey or confuses adults because of how blunt he’s being. Thor is a theater geek who’s burying his own passion so he can try and impress other tweens. Unfortunately he’s not privy to the fact that they’ll never like him, no matter how many sips of a beer he’ll take. Max is the only one invested in this adventure, since he was the only one to actually be invited to the kissing party. He actually had to coerce the cool kids into allowing him to bring Lucas and Thor. It sets up the film’s final act fairly well. For a movie that’s as foul-mouthed as “American Pie,” it’s good to see that there’s an actual attempt at teaching a lesson in maturity and growth.

“Good Boys” is a passable entry into the coming-of-age films, but it isn’t unique or funny enough to stand tall with classics in the genre. It also suffers from some of its best jokes being in the trailer and a somewhat scatterbrained story flow that hiccups when it comes time to deliver a wise crack or sight gag. The three child actors manage to elevate a so-so script and they’ll certainly win over the adult crowd that sees this, as well as those young ones that sneak in to see what all the fuss is about.