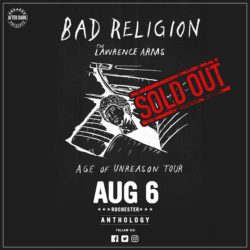 Bad Religion made a stop at Anthology in Rochester, NY on August 6th as part of the bands current “Age of Unreason” tour.  Along with the elder statesmen of punk were special guest The Lawrence Arms. Despite a thirty year lapse since the bands last performance in the Flour City both groups brought their A game to the sold out crowd who packed the gills of the intimate venue on a warm Tuesday night.

Epitaph label mates The Lawrence Arms opened the evening’s festivities promptly at 8pm and as the venue quickly filled to capacity the three piece group from Chicago, IL held court treating fans to their windy city brand of grit infused punk rock. Bassist/vocalist Brendan Kelly jokingly traded barbs with the audience between songs and at one point noted that this was the bands first time performing in Rochester. The band sounded great as it played songs from it six album catalog including a handful from their most recent release 2014’s “Metropole” before leaving the stage to a chant of one more song from the ever growing crowd.

After a somewhat timely change over Bad Religion would take to the stage basked in powerful, dark blue lighting. The band opened their set with the edgy “Them and Us” from the 1996 album “The Grey Race”. Vocalist Greg Graffin and the rest of the band consisting of Jay Bentley, Brian Baker, Mike Dimkich and drummer Jamie Miller blasted through a 27 song set full of classic BR songs like “Stranger Than Fiction”, “Atomic Garden”, Suffer” and “21st Century (Digital Boy)” and newer songs like “Chaos From Within”, “My Sanity” and “Do The Paranoid Style” all of which are from the bands recently released studio album “Age of Unreason”.

Bad Religion certainly made up for their long absence in Rochester as the bands high energy 27 song set fed the need of both long time fans and fellow new comers (some of whom were as young as 12 years old). Anthology’s medium sized venue played a near perfect host for the humble punk veterans who seemed to really appreciate the vibe and energy they received in return for their stellar performance. Bad Religion will be on tour in the States through October so if the band is coming to your area you owe it to yourself to be there!