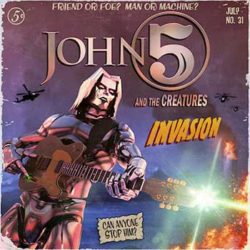 John 5 and the Creatures

Just when you thought guitarist John 5 had taken his unique mixture of “Hee-Haw” infused shred as far as it could possibly go the former Marilyn Manson/K.D.Lang/Rod Stewart guitarist flips the switch to show listeners that all previous accounts were just the catalyst to “Invasion”. From the eerie opening sound-scape “Invasion” to the robotic “I Am John 5” and the quirky “Zoinks” listener’s senses are put through the wringer before being pushed even further with the twang-tastic, “Howdy” and the pedal steel laden “Cactus Flower” both of which showcase 5’s strong country influences. On the back end of the album are tracks like “I Want It All” and “I Like The Funk” both of which are doused with enough funky textures and tones that they will have the one and only George Clinton scratching his head.

You don’t have to be a guitar player to enjoy the music contained on “Invasion”. From over the top molten distortion to funkified wah worbles and sparkly cleans the latest offering from John 5 and the Creatures is a hodge-podge of musical influences which explode out of your speakers with reckless abandonment. Despite “Invasion” not being the most cohesive collection of songs from the group the album does give listeners a wide pallet to choose from making it worth checking out.