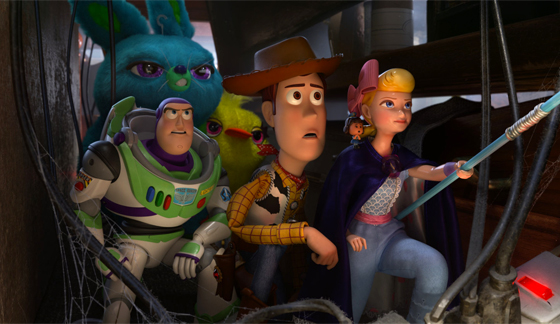 Since 1999, audiences have asked three times, “Do we really need another one of these?” And every time, Pixar responds with, “Yes,” and audiences have overwhelmingly agreed. It’s astonishing that that same animation studio has struggled to justify other sequels, yet has had no problem continuing the adventures of Woody (Hanks), Buzz (Allen) and the other toys we’ve come to love over the past 24 years. So I almost have to wonder, is it really time to say goodbye?

If you haven’t been keeping up-to-date with these movies, the toys are no longer with their kid, Andy. They were left in the care of Bonnie (Madeleine McGraw) and she’s now off to Kindergarten. Woody, wanting to ensure that his new kid is happy despite the scary change, tags along for her first trip to school, only to watch Bonnie struggle with making friends. So with some unforeseen help from Woody, Bonnie creates a new companion/toy, called Forky (Tony Hale). The fork, with crudely created feet and arms, creates a lot of existential questions for the toys, and audience. Forky doesn’t see his purpose as a toy, actually knowing that his purpose is to be a utensil and to be tossed in the trash. He believes in that mantra so much, that he abandons Bonnie during a family trip, leaving Woody to have to go after him.

In a lot of ways, “Toy Story 4” is a road trip movie where Woody and Buzz inherently grow up. Along the way, Woody is reunited with Bo Peep (Potts), one of the secondary characters from the first two films, but unexplainably missing from the previous film. In this one, we’re shown why Bo Peep is absent from that third film and just how important she is to Woody. So much so, that when she reunites with Woody, that’s when things come-to-a-head for Woody, who just isn’t quite as happy in his new life with Bonnie as he was with Andy.

Thankfully it isn’t just Woody who’s having an identity crisis. A lot of the toys in the movie seem to be pondering their own place in this world they don’t quite understand. Woody’s knows all the rules, but may be tired of following them. Buzz may be realizing that the world isn’t as black and white, and that tough decisions come from reflection and listening to that little voice inside your head. It’s astounding that after giving our toys in the previous film, a fresh restart on bliss, that they find themselves still wondering if there’s more to this world. It’s something that kids can surely latch on to as they grow into the world around them, and for their parents who still ponder a lot of “What ifs?” in their own life and own personal quest for happiness. It’s astonishing that the fourth of any franchise, animated or not, could be this profound.

Another thing that seems to impeccably be a part of Pixar’s storytelling arsenal, is their seemingly effortless nature to establish loveable characters. Like the first three, “Toy Story 4” introduces us to a lot more toys, maybe some of the most memorable ancillary ones of the series. Although this one has the benefit of having a lot more star power, with guest stars like Key and Peele, Christina Hendricks, Keanu Reeves, and some brief cameos by the likes of Mel Brooks and Betty White. Those kinds of cameos may give credence to the belief that Pixar is officially done with the franchise.

I would have never guessed back in 1995, as a seven-year-old in theaters, that these plastic toys come to life would make me cry twice later in my life. While a lot of that is because I’ve actually grown up and matured alongside these characters, Pixar’s writers and creators bare their soul and tap into a lot of elements of the human condition in this series. The franchise has managed to create a litany of unique and impactful messages that feel simple enough for kids to understand, but complex enough to resonate throughout one’s adulthood. As much as I was OK with saying goodbye in “Toy Story 3,” especially with where our toys were left, part of me doesn’t want to say goodbye this time because of how Pixar has always given these characters something new and heartfelt to say every time.