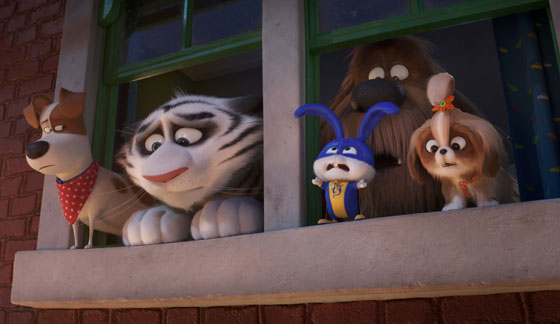 If you are a pet owner, I’m pretty sure you’ve seen, and loved, “The Secret Life of Pets.”  It was uncanny how the creators captured the little idiosyncrasies that had many in the audience, myself including, thinking “that’s exactly what my dog/cat/bird/ferret, etc does.  And that insight carries over into the second chapter in the adventures of Max (Oswalt) and his furry and feathered friends.

Things are going well for Max.  His owner attends to his every need and all is right with the world.  Until the day she meets a gentleman.  Nothing wrong with that.  But as things progress, as they do in life, Max soon finds himself having to deal with a new person in his life…a baby.  At first he is wary of the new arrival, but as the boy grows, they form a bond that, anyone who had a dog as a child will know, can’t be broken.  Which makes Max frantic.  Where he used to enjoy going for walks, he now feels the streets, and the things encountered (steam grates, flocks of pigeons) are hazards for the boy.  This causes him to develop a nervous tic which sadly leads him to be encased in, what both my wife and I (and the film) call the cone of shame.

Meanwhile, in another part of town, Snowball the bunny (Hart) is also enjoying life.  His owner likes to dress him up as a superhero and he takes to the idea, proclaiming his prowess to his pet friends.  He is quick to jump – do you see what I did there – into action when he is asked by his Shih Tzu friend Daisy (Tiffany Haddish) to help save a tiger being held by a cruel circus worker.  What’s a bunny to do?

Cleverly written and fast paced, “The Secret Life of Pets 2” is the ideal early summer film.  The characters and their traits are spot on and the voice actors do their best to inflect some of their own personalities into the characters.  Oswalt, replacing original Max voicer Louis C.K., is well cast.  Of course, he was outstanding as the voice of Renny in “Ratatouille,” so this should come as no surprise.  Hart once again is the frantic Snowball and I’m happy to see he is no longer homicidal (my one big problem with the first film).  Other actors lending their voice include Eric Stonestreet, Jenny Slate, Nick Kroll, Ellie Kemper and Pete Holmes.  Even Harrison Ford shows up, marking his animated film debut.  But as great as they all are, the vocal star here is Lake Bell, who seems to inhabit the character of Chloe, a cat like no other and yet like every cat we’ve ever encountered!

My only fault with the film is the same one I had with the first.  Though obviously geared for kids (and the parents that accompany them), there are some scary moments here, including one (thankfully off camera) of the tiger being disciplined with a whip.  There is also a pretty intense pack of wolves that made at least one child near me at the screening hide her face in her mother’s side.  So parents with very young children, be warned.

All in all, though, “The Secret Life of Pets 2” is a welcome treat to begin the early days of summer.