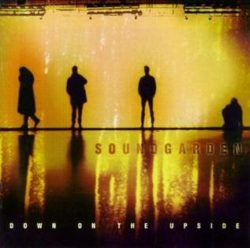 “Down On The Upside” 35th Anniversary Vinyl

Soundgarden’s Platinum selling 1996 release “Down On The Upside” is the latest album from the bands catalog to be included in the Seattle natives 35 year Anniversary Collection. The third in a series of vinyl releases commemorating the bands career the 16 track, 2 LP set is being pressed on limited edition 180 gram colored vinyl and comes packaged in a full color, dual gatefold sleeve complete with album liner notes.

Though this is not the first time “Down On The Upside” has appeared on vinyl it is certainly the brightest. Right away listeners will notice the heavy weight, 180 gram, limited edition Orange and Purple marble pressings which play host to some of Sound Garden’s biggest hits of the mid 90’s. Listeners will obviously want to check out “Pretty Noose”, “Blow Up The Outside World” and “Burden In My Hand” but I also would recommend “Rhinosaur” and “Dusty” as well. Visually the release pulls out all the stops as the orange and purple vinyl feature subtle marble swirls which look really cool when spinning on your turntable. The gatefold packaging is also nicely done and is printed on heavy weight card stock fitting of a special release.

Though the album is nice to look at I found it to be pretty lax in the listening dept. The sound quality was ok but it was certainly dated and could have benefited from a remix and re-master. In 1997 the band released a greatest hits compilation including the songs “Karaoke” and “Bleed Together” which we outtakes from the “Down On The Upside” sessions however, neither of those songs were included here making for a big miss in my book. The last disappointment was the fact that no digital download codes were included thus making it slightly difficult to listen on the go. If you purchased a copy of this record upon its initial release then I say stick with that and skip over this re-release but, if this is an album that has been on your list to pick up now is a great time while it is available in a limited edition release.

6.) Blow Up The Outside World