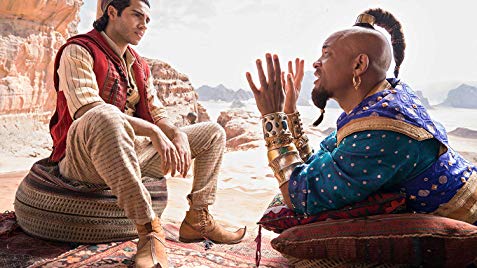 Will Smith has fought many a cinematic battle.  He’s taken on drug dealers, aliens (many times), a mechanical spider and George Foreman and beaten them all.  This week he takes on his biggest challenge, the memory of Robin Williams.  And I’m happy to report he succeeds.

We open with a family at sea.  The children remark at the opulence of the boats around them, causing their father to remind them that bigger isn’t always better.  He then begins to tell them the story of Aladdin and his Magic Lamp.  We meet Aladdin (Massoud) as he and his monkey companion, Abu, work their trade through the marketplace.  Their trade is theft, and they are very good at what they do.  However, when Aladdin sees a beautiful young woman (Scott) ahead of him, his thoughts go from larceny to love.  He introduces himself and offers to show her the town.  However, she suddenly rushes off, explaining that she is a handmaiden to the daughter of the Sultan.  Like Cinderella, she is off with Aladdin seeking to find her.  However, unlike Cinderella, SHE is the Sultan’s daughter, which puts her a little out of Aladdin’s league.  If only he had a way of becoming a prince.

The least “Guy Ritchiest” of any Guy Ritchie film, “Aladdin” is actually an entertaining bit of filmmaking.  All of the characters from the beloved 1992 animated film are here.  Aladdin.  Princess Jasmine.  Jafar (a very evil Marwan Kenzari).  His parrot, Iago.  Abu.  Rajah the tiger. And, of course, the Genie.  Robin William’s performance as the Genie in the animated feature was so amazing that the Golden Globes created a special award for him.  It was really the first time I thought that an actor would get an Oscar nomination for voicing an animated character.  I give Will Smith a lot of credit for even accepting the role.  And he does well.  He isn’t Robin Williams, but he isn’t trying to be.  This is vintage early Will Smith.  Think the Fresh Prince or Mike Lowery from “Bad Boys.”  A lot of fun and a lot of attitude.

The musical numbers are immaculately staged, like you just wandered into a “Bollywood” production.  And while this film is about 40-minutes longer than it’s animated predecessor, it doesn’t suffer under the crush of added time like the recent “Dumbo,” which was almost twice as long as the 64-minute animated original.  The cast is excellent, and I’ve read where Disney made sure to cast actors whose heritage is from the actual parts in the world the film depicts.

My one disappointment, and this was echoed by many of the people around me in the screening that sat through the entire closing credits, was that there was no dedication to the memory of Robin Williams.  For generations to come, whenever the animated “Aladdin” is mentioned, his name will be the first thing brought up.  A very simple “FOR ROBIN” would have been a fine and quiet tribute.