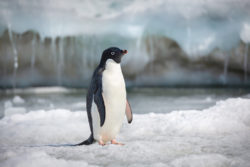 I don’t know what it is about penguins that make them so damn cute!  Is it the way they walk?  The fun they obviously have when they slide across the frozen tundra of the Arctic?  The excessive fuzziness of their young?  I really don’t know but I’m pretty sure they could do an all-penguin remake of THE EXORCIST, complete with projectile vomiting and self-gratification with a crucifix and people would go “awwwww.”   Which is exactly the sound I made many times during a recent screening of “Penguins.”

Steve is an Adelie penguin looking for love.  He and the other males in his colony are on a trek to find a mate.  But the road to love isn’t easy.  Especially when your pals are stealing parts of your nest in order to attract that special gal.  And what are you supposed to do when you finally meet her?

A beautifully shot (over an almost three year period) film that manages to be both heart-warming and thrilling, “Penguins” gives the audience the “birds-eye” view of life in Antarctica.  And it’s a pretty chilly one.  Whether it’s having to walk miles upon miles to find food or teaching your chicks how to play dead when a leopard seal tries to eat them, it’s a hard knock life.  Yet, it’s also one full of love and adventure.

Like “March of the Penguins” before it, “Penguins” is a film the entire family can enjoy.  Kids will love it for the penguins; parents for the story.  Nature is on full display in this film and it’s one I highly recommend.