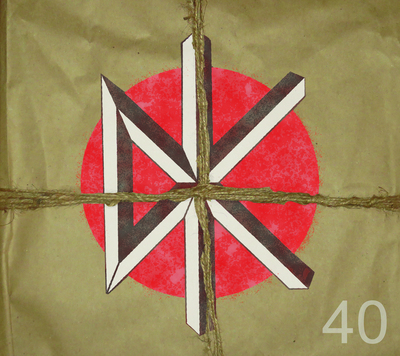 Out of the hundreds of punk bands that emerged from the late ’70s punk scene, only about a dozen or so have achieved iconic status four decades later. One of those was the Dead Kennedys. The DKs embodied the spirit of punk from the get-go. Their very name was a shocking reminder of the collapse of the American Dream. Then again, the name would be nothing if the Dead Kennedys didn’t have the goods to back it up. The band’s latest offering titled “DK 40” is a three-CD live collection featuring three different performances from the early 1980’s. The collection is being released via Manifesto Records and offers the aural evidence that the Dead Kennedys were one of the most potent punk bands — period.  It features the band serving up amped-up live versions of all their classic tracks, free from the constraints of the recording studio.

If you never had the chance to catch Dead Kennedy’s with the classic lineup of Klaus Flouride, East Bay Ray, D.H. Peligro and Jello Biafra then now is your chance. The newly released “DK 40” provides listeners with three different live performances from 1982 and 1985. All the bands staple songs are here including “Kill The Poor”, “Nazi Punks Fuck Off”, “Chemical Warfare” and of course “Holiday in Cambodia”. Disc 1 and 2 include performances from the bands 1982 European tour and feature similar track listings however Disc 3 showcases the band in their home city of San Francisco in mid 1985. This disc was probably my favorite of the three as it featured a wider variety of material than the previous two discs including songs like “Hellnation”, “Jock O Rama” and “MTV Get off The Air”.

If you are looking to add to your DK collection or start one then “DK 40” is a solid starting point/addition. You get all the well known material along with a spattering of lesser known tracks giving the 3 disc set a nice balance for all level of fans. Where I found the package to be a little lacking was that it featured two nights from the same tour making for some redundancies. The band did tour in 1983 and 84 so I am not sure why they chose to include two shows from 1982. On the plus side the three discs come packaged in a sleek tri-fold package with interior and disc artwork by Eric S. Goodfield and also includes a brief description of each show giving listeners just a little something extra to help celebrate the bands 40th anniversary.